iPhone killer or just a Storm in a teacup? 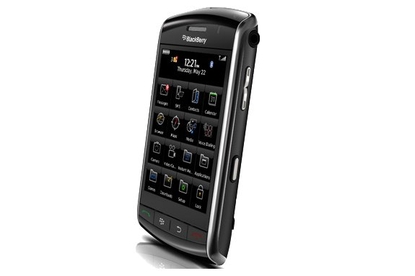 We really want to like the Storm. The clickable touch screen is an interesting concept, e-mail access is as strong as ever and it’s a well-designed device. Sadly, the Storm has too many niggling issues, mainly software-based, that prevent it from being the great BlackBerry it could have been. These might be fixed with future software upgrades, but, as it stands, using the Storm is largely a frustrating experience.

Following the success of Apple's iPhone 3G, it seems every manufacturer is attempting to get a piece of the touch-screen pie. RIM is one such example, launching the first BlackBerry without a physical keyboard, the Storm. Using a "clickable" touch screen to imitate the pressing of actual buttons, the Storm is an admirable handset but it falls short in many key areas.

Build quality and durability have never been a strong point of BlackBerrys, but the Storm holds up quite well in both regards. While not as aesthetically pleasing as the iPhone, the Storm's gloss black casing on the front combined with silver edges and an etched rear cover make it one of the most attractive BlackBerrys yet. It also feels reasonably sturdy; after a few days use, we didn't notice any scratches or marks, despite it often finding a home in our pocket alongside a set of keys.

The biggest talking point of the Storm is its 3.25in touch-screen display. Unlike the iPhone, the Storm's display is "clickable", so you physically press down on it to make a selection. As the entire display depresses, the screen slightly moves from side to side when wiggled — although this may seem like a design fault, a "pressable" display does need some leeway in this regard, so it is not really an issue. That being said, we can foresee plenty of dust making a home in the space around the edges of the display over time.

When you tap the Storm's display, like you would on the iPhone, it recognises your selection by highlighting the key you've pressed, but it doesn't activate that particular function until you press. This is a shame; we would have liked to see both methods used for data entry — those who prefer the experience of pressing buttons could do so, while others could simply tap the display with their finger. Unfortunately, a light touch on the on-screen keyboard highlights the key with a blue glow but it doesn’t type anything. On a positive note, pressing the display delivers an audible clicking sound, so tactility is much better than regular touch screens.

The Storm has three keyboard layouts. When the phone is held in regular portrait mode, you can choose between a SureType or multi-tap keyboard — both have two letters on each key, but the SureType system requires you to press the key only once for each letter, similar to the T9 method. When you rotate the Storm into horizontal mode, you then get a full QWERTY keyboard (after a lengthy delay).

Strangely, the full keyboard isn't available in regular portrait mode, which some users will find frustrating. Personally, we don't think it's such a big deal as the SureType keyboard is more efficient than the full layout. We struggled to type at reasonable speeds using the latter, as the layout means you'll inadvertently wind up pressing the wrong keys. Despite the on-screen keyboard, there are no custom buttons to make life easier, such as a .com button when entering Web addresses or a quickly accessible @ key when typing e-mails.

The user interface looks excellent and it is well designed. However, there are plenty of issues. During various tasks, particularly when the screen orientation is changed, there is noticeable lag. Scrolling is certainly not as efficient as the iPhone. Scrolling through lists requires you to flick your finger up the screen, but there is a slight delay and you can't flick faster to scroll further. Selecting items is also a hit-and-miss affair: often the Storm will inadvertently select an item close to the one you are attempting to select. It is also sluggish for some of these tasks, especially changing the screen orientation.

For mobile Internet, the included BlackBerry browser can't compete with Safari on the iPhone. Panning around the page is more arduous than should be, and due to the touch screen you'll often find yourself pressing the wrong links on mobile pages. It is also annoying to type on some pages, as the on-screen keyboard sometimes covers half the page; it can be hidden and shown by sliding up or down on the keyboard, but its implementation needs more work.

Among all the disappointments, the biggest let-down is the lack of Wi-Fi. HSDPA is a welcome inclusion, as is a GPS receiver and the preinstalled BlackBerry Maps software, but the lack of Wi-Fi could be a deal-breaker for some and seems like a backward step by RIM. The Storm is exclusive to Vodafone and the telco offers "unlimited" e-mail and Internet use on all Storm plans. However, there is a catch: for video streaming or downloading files larger than 3MB, users will be charged 50 cents per MB. Alternatively, customers can purchase a 100MB data pack add-on for an extra $9.95 per month.

Despite the issues, there are plenty of positives. Phone calls are loud and clear and the same is true of the hands-free speakerphone. The display itself is gorgeous, especially for multimedia. While slightly smaller than the iPhone, the screen looks excellent for videos and pictures (though perhaps slightly trumped by the iPhone) and the 3.5mm headphone jack will impress multimedia buffs, as will the 1GB of internal memory and microSD card slot. One annoyance is the fact that music completely stops playing (after a lengthy lag) when an e-mail notification is played, unlike the iPhone which slightly lowers the volume and doesn't interrupt your music. The rear speaker is excellent — it is by far the loudest we've ever heard on any mobile phone to date.

The Storm will even sync with iTunes using the BlackBerry Media sync software available from RIM's Web site. It won't play DRM-protected files though, and Mac users will have to wait a while longer — this software hasn't been released for Mac OS X yet.

Underneath the flashy exterior, this is still a BlackBerry at heart and for most consumers this is the good news. As a phone, the Storm offers voice dialling, conference calling, speed dialling and call forwarding. The full suite of e-mail capabilities is as strong as ever, while the calendar system remains the same as previous models. The Storm also includes an average 3.2-megapixel camera with autofocus and flash.

Unfortunately, the handset's battery life is questionable. Despite not possessing Wi-Fi, the Storm still barely lasted a full day during testing, albeit during fairly frequent use.