Ricoh's GXR is a modular digital camera that's sure to make your friends ask you all about it. Paired with the A12, 50mm prime lens unit, the GXR can produce vibrant and very clear photos, but its focusing performance was a let-down. There's a still a way to go before the GXR becomes awesome: it needs a larger lens selection and better focusing performance.

The Ricoh GXR camera system features a new concept for consumer digital photography equipment. The GXR digital camera allows users to swap out not only lenses, but lenses with built-in sensors. An imaging sensor is not built into the GXR's body; instead there's one in each of the camera lens units. It's a design that takes a little getting used to, and it's sure to draw plenty of attention the moment your friends get a glimpse of it. 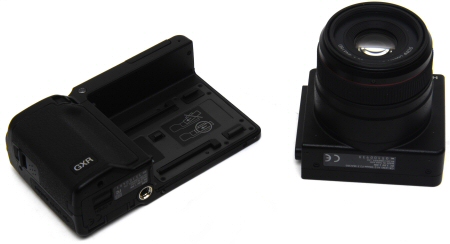 The Ricoh GXR looks very weird without its lens unit.

The GXR's body ($699) has a 3in LCD screen; it's made out of metal and is very tough. It has a comfortable handgrip, a battery and SD memory card compartment, and control buttons. Ricoh claims that it's the smallest interchangeable lens camera on the market — it's a few millimetres smaller than Panasonic's Lumix GF1 Micro Four Thirds-based camera.

There is a processor built in to the body that runs the menu system and the camera's standard features, but the lens units have their own image processing built-in. This will determine the quality of images (the type of processor will depend on the camera unit). Together, the camera unit and body combine to produce potentially excellent picture quality, great low-light capabilities, and a relatively fast burst mode.

Camera units (lenses) can be slipped onto the front of the GXR's body and locked into place. In this sense the GXR is a lot like a digital SLR, but you are also changing imaging units along with the lenses. Each lens has a different sensor that has been matched to it to give the best performance for its focal length; the megapixel count of the GXR will vary depending on which camera unit you use. At the moment there are only two camera units available for the Ricoh GXR, and they are the 12.3-megapixel GR Lens A12 50mm f2.5 Macro ($999), and the 10-megapixel Ricoh Lens S10 24-72mm f-2.5-4.4 VC ($649). The former is a prime lens while the latter is a 3x zoom lens. Because the sensor and lens are one unit, dust getting on the sensor when swapping lenses is not an issue in the same way it is with a digital SLR or Micro Four Thirds camera. 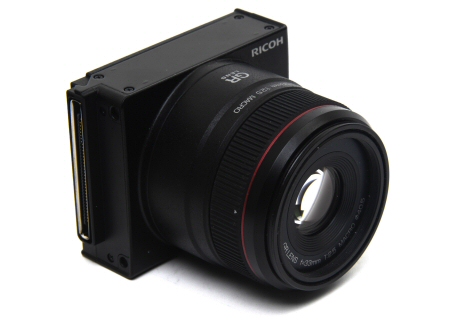 As well as different lens units, the GXR body can accommodate accessories via its hot shoe. The hot shoe can be used for an external flash (GF-1) or an electronic viewfinder (VF-2). There isn't a glut of controls on the body; you get a basic five-way thumb control, as well as dedicated buttons for playback, macro, self-timer, and LCD mode. There are dedicated controls for changing the lens aperture and shutter speed, but there is no direct ISO control, which is annoying. This can be overcome by programming one of the thumb control's two functions buttons to invoke the ISO setting when pressed.

For our tests we used the GR Lens A12 camera unit, which is a 50mm prime lens (35mm equivalent) with a maximum wide aperture of f/2.5. It is matched up to a 12.3-megapixel, 15.7x23.6mm CMOS sensor. This is a big sensor for such a small camera; the similar-sized Panasonic Lumix GF-1's body has a fixed 13.5x18mm sensor. The GR Lens A12 is capable of capturing breathtaking images, with excellent clarity, detail and colour, and it performs exceptionally at high ISO speeds.

You can see from the photos below that noise only became a concern at ISO 1600. Even then, the noise was not manifested as miscoloured speckles but as slight greyness and feathering. The results between ISO 1600 and ISO 3200 were similar, although there was more loss of detail at the higher level. Nevertheless, if you are not viewing photos at their native size, then you probably won't be bothered by the noise and loss of detail. The minimum ISO setting for the GXR is ISO 200, and coupled with the f/2.5 lens aperture, it will perform very well in low-light conditions.

View our slideshow of test images to see how the GXR with the GR Lens A12 performed both indoors and outside.

The GR Lens A12 has contrast-based focus, which doesn't always pick up the correct focus point. It's especially hit-and-miss at close distances when using macro mode. When it misses, you have to switch to manual mode. In autofocus mode it tries valiantly to search for a focus point and ends up missing it completely. The most frustrating part is that when you watch the screen as it tries to focus, it actually passes an in-focus point to settle for a blurry shot instead.

Manually focusing the lens is also a bit of a chore — the focus ring has plenty of resistance and no fixed rotating points, so it will just keep on turning. It can actually be uncomfortable to focus the lens when you're also attempting to hold the camera still and perfectly positioned in front of your subject.

Discomfort aside, manually focusing the GR Lens A12 can produce stunning results with very narrow portions of an image being in focus (see the slideshow for examples), especially when you use macro mode. For night-time photography, there is a powerful focus-assist lamp, which is useful to pin-point subjects up to 5m away, after which it will struggle.

You will often end up with a part of the image in focus that isn't supposed to be. The ability to select from different focus points in sorely missed in these instances; it would make this camera so much easier to use.

There's no doubt that the best aspect of the Ricoh GXR is the ability to pair it with a large-sensor unit such as the GR Lens A12, which can take breathtaking pictures. While we did have issues with the slow and inaccurate focusing of that lens, its picture quality is superb. You can buy the GXR with the A12 in a kit for $1599, which is $99 cheaper than buying them separately. You can also purchase a kit with the A12 and S10 units for $2099, which is a saving of $248.

We like the concept of the Ricoh GXR, but there needs to be more lens options if it is to tickle the fancy of ordinary consumers who are looking for an interchangeable lens camera. Once some lens units with larger zooms are released, then it should appeal to a broader audience. We also hope its focusing issues can be ironed out. For now, though, it's suited to anyone who wants a high quality 50mm prime macro lens, yet doesn't want to invest in a conventional (and much larger) digital SLR camera. Of course, if you want a high quality prime with a wider lens, you could always go for Ricoh's GR Digital III advanced compact camera.