Roccat KOVA AIMO review: An adept, if familiar, alternative to the DeathAdder 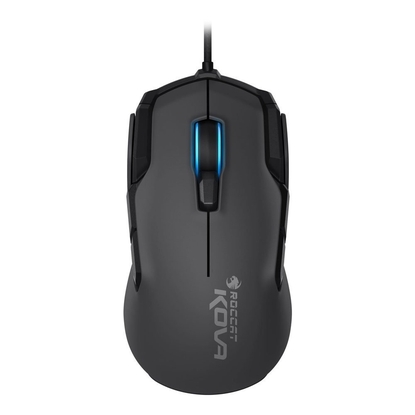 The Roccat KOVA AIMO is an adept alternative that’ll likely suit those who want something off-the-beaten path but no less accomplished than its competition.

Like any good gaming brand worth their salt, Roccat recently introduced their new AIMO dynamic lighting system. And in addition to making their new products look brighter than the competition, AIMO has been a great excuse for Roccat to revise and update their backlog - starting with the Roccat KOVA mouse.

Does it look better? Totally! Are those better looks enough to convert the many DeathAdder devouts out there? I’m less convinced.

Where many alternatives from Logitech and Razer market themselves as minimalist, Roccat’s Kova AIMO has a more sculpted look and feel to it.

It doesn’t feel like they just stuck a bunch of LEDS on a mouse and called it a day. Rather, it feels like they actually looked at the way that PC players actually use mice and then molded the capabilities of the KOVA AIMO around that.

Sure, the KOVA AIMO is hardly unique in that it has a bunch of extra function keys on it but it is uniquely nuanced when it comes to their placement. They’re ergonomic in that they’re easy to reach but they’re placed such that you’re rarely ever going to hit them on accident. This sense of consideration is made all the more impressive when you factor in the ambidextrous design of the KOVA.

I didn’t find the KOVA AIMO quite as lightweight to handle as Logitech’s Pro G gaming mouse, nor does it have the tactile grip you get from as something like the classic DeathAdder. Still, it struck a compelling balance.

And it doesn’t hurt that the software ticks all the right boxes. Though the setup process involved one too many steps for my liking, the Roccat Swarm app gives you all the usual functions. You can modify the DPI settings on the Kova AIMO. You can play around with the lighting settings and polling rate. You can even set up per-game lighting profiles and macros. This is great to see - even if it’s not exclusive or new.

What’s not so good about the Roccat Kova AIMO?

Well, honestly, the biggest drawbacks I’d highlight here are the weight and the AIMO lightning itself.

As mentioned, the Roccat KOVA AIMO is hardly a burden to move around your desk but I did find it noticeably heavier than a lot of gaming mice have been trending recently. For this reason, it was sometimes really hard to rely on when playing games where rapid reflexes and reactions are required like Overwatch or Destiny 2.

On the other side of things, the AIMO lighting on the mouse itself wasn’t super thrilling. I mean, it looks nice enough and doesn’t come across as too obnoxious or overly subtle. However, I can’t shake the feeling that Roccat have played things a little too safe here.

You’ve got a strip of LED lightning running along the mouse wheel and then a second glade nestled underneath where your palm ordinarily sits. At least one of these locations is going to be actively concealed while you’re using the KOVA AIMO. As a result, you never really get the full AIMO lighting effect.

At any given moment, you’re only really getting half of it. For that reason, I found myself wishing that Roccat pushed a little further with the lighting on the KOVA AIMO. Theres’ little point having lighting that looks this nice if you can’t actually see it.

The third and final thing that wrankled me about the Roccat Kova AIMO was just how familiar it felt. To play devil’s advocate, the Kova Aimo wasn’t exactly calling for a total reboot. Still, there’s little new here beyond the extra bells and whistles. The Kova Aimo is going to replace the original Kova in Roccat’s product portfolio. It would be nice if they gave existing KOVA owners a reason to do the same.

Although cast in a bright, new and appealing light, the core pitch for the Roccat Kova is still very much the same. It’s not cheap - but it is affordable. And it’s not the best - but it is good. The Roccat KOVA AIMO is an adept alternative that’ll likely suit those who want something off-the-beaten path but no less accomplished than its competition.