While L.A. Noire may not appeal to everyone, those that are charmed by its mean streets will likely love every second of it. It's a bold, cinematic step forward in a genre that’s dying for innovation, and its implementation of the MotionScan technology is truly a game-changer.

I've been racking my brain this past week for the phrase to best describe Detective Cole Phelps, L.A. Noire's fedora-clad gumshoe and ostensibly infallible leading man. I've toyed with "straight-laced," which seems too two-dimensional a descriptor, and I briefly considered "haunted," but it comes across as needlessly tragic. The word I keep coming back to is "driven" — driven by his unshakable morals, driven by a deft intellect, and driven by the demons borne during the events of his tour in World War II Okinawa.

It's this drive that synonymously relates and separates Phelps to and from previous Rockstar-published protagonists. Brendan McNamara, developer Team Bondi's founder and L.A. Noire's writer and director, paints the detective as a "golden boy" crime buster and war hero at first blush, channeling L.A. Confidential's determined Detective Edmund Exley more than Red Dead Redemption's quick-drawing cowpoke, John Marston. Opting for his notepad and pen over a Colt .45, Phelps' most dangerous weapons are his cunning and ambition. But like Marston and sociopathic ex-soldier Niko Bellic before him, the detective is a product of his blood-stained past deeds. And over the course of Noire's 21 core cases, he’s tasked with confronting and, hopefully, conquering them all. 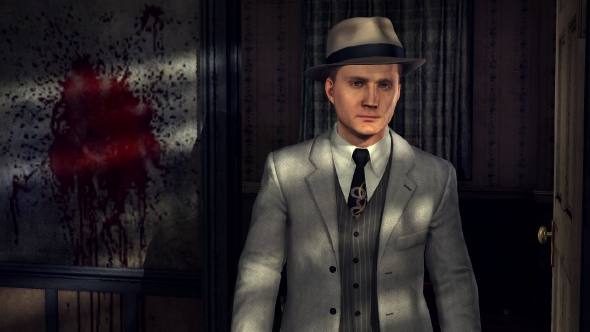 Touted as an atmospheric "detective thriller," Noire is a very different beast from publisher and co-developer Rockstar's previous open-worlders. Sure, it features many of the same cinematic staples ever-present in the studio's impressive oeuvre, such as run-and-gun shoot-outs and an ample amount of tire-stripping car chases, but Noire is more Tex Murphy than Grand Theft Auto, employing players' intuition before the speed of their trigger fingers. The two core gameplay features — crime scene investigation and witness/suspect interrogation — are tense affairs that demand every ounce of the player's attention. Investigations call for a keen eye for vital clues, as well as plenty of patience, as each scene is littered with inconsequential red herrings. Rife with telling evidential details and "aha!" moments, these investigation sequences manage to be engaging without tottering into tedium, and present a thoughtful approach to (and evolution of) the HD-gen adventure game.

The interrogations are even more demanding, pitting players face-to-face with civilians and criminals who regularly lie, mislead, and withhold important information. These sequences smack of a more mature and grounded take on Phoenix Wright's melodramatic cross-examinations, but when players aren't presenting hard evidence to debunk bogus claims, they’ll have to use their instincts to determine if said suspects are telling the whole truth. It's more challenging than it sounds — due in no small part to the endlessly impressive MotionScan facial animation technology — and the hard-boiled script really comes to life with some of the most convincing performances I’ve yet seen in a video game.

While gun-toting does tend to take something of a backseat, Noire's more cerebral moments still regularly give way to action-packed set pieces. The game's scripted nature presents opportunities for some incredibly cinematic scenes, including an impeccable foot-chase through a decrepit film set, and a memorable shootout sequence set in an ice factory. Phelps isn't as much a one-man army as Bellic or Marston, but Noire's gunplay still feels very rewarding. (ProTip: If someone shoots your fedora off, wait until the dust clears and walk over to it — Cole will pause to place it back on his head)