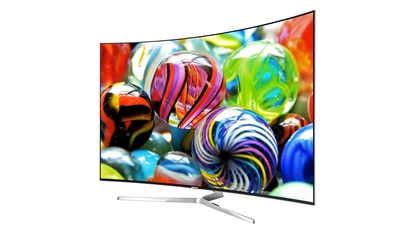 Samsung's top-end TVs will impress anyone when displaying high-quality content. The curved models can help deflect reflections in bright rooms too. But they're expensive and there's better value and performance elsewhere.

This review is taken from a test where we compared Hisense's ULED TV against Samsung's entire range. Also, it features in our Top TVs of 2016 feature and is listed as a top-rated review. Also, check out Samsung's latest 2017 QLED TVs here.

Samsung chops its 2016 TV range into affordable and expensive product lines which come with, sometimes-haphazard, price increases. At the top are the 8000 and 9000 series models.

The cheap 6000 series is only available as a flat panel (not curved), it only comes with a basic remote (not the smart "One" remote), there’s no breakout box for connections (all cables plug into the back of the panel), the styling (mainly at the rear) is flat and glossy, not textured and ‘smart.’ The 7000 series has broadly-similar image technology to the 6000 but now lighting comes from the sides (actually reducing contrast) and curved screens become available. Styling matches Samsung’s top-end 9000 series but there’s still no breakout box for all connections. While the image is similar to the 6000 series, the screen is thinner. You also get a smart remote included but there are fewer choices of screen sizes.

The 8000 series represents a step up from the 7000 series in terms of image quality thanks to the Ultra-Dot technology. Here’s a cheerful video that attempts to explain the complex physics behind it...

Styling at the back is the cheaper glossy type, the size range is reduced further but flat and curved screens are available, you get the breakout box for connectors and the smart remote. The 9000 series is the one Samsung is hanging its hat on, it offers Samsung’s best image quality (which is slightly brighter and more vibrant than the 8000 series), the stylish backing, the smart remote and the breakout box. There are some anomalous, giant variants with different back-lighting technologies which we’ll deal with separately.

Many of the differences are broadly-cosmetic across the range. Styling really isn’t a big differentiator unless you can see the back of the TV. All of the TVs display great UHD quality but the more expensive variants have significantly-better colours. They all have the same proprietary Tizen operating system which doesn’t have too many apps available for it, although we do like the way that inputs are denoted by icons showing a picture of the device rather than just a number that you’re supposed to remember.

All of them show great detail and clarity when displaying the best 4K content but struggle when showing standard definition (something that’s been a facet of Samsung’s for a while now) though this is more of an issue on the 6000 and 7000 series. We also noticed that movies and drama could still suffer from the Soap Opera effect (where characters in a scene start looking like actors on a set and it’s very distracting) on all models although it’s far reduced from older Samsung TVs. The 6000 and 7000 series are good at displaying blues but other colours are relatively flat. However, the 6000 series actually displayed some of the best blacks – it’s thinner siblings with their ‘more advanced’ side-lighting actually aren’t as good with blacks. Samsung has been pushing these TVs to typical, bright-light Aussie homes for a reason – watching movies in dark rooms, while not distracting, is not the strong point of these TVs – letterbox bars are noticeable even in the darkest modes.

However, something we love about Samsung’s TVs is the Sports Mode. This, conveniently, now has a dedicated remote button and it makes the image brighter, the people on screen become more-realistic (the Soap Opera effect done right) and the sound starts replicating stadium acoustics - it's very atmospheric. If you primarily watch sport – especially footy in stadiums – Samsung is unsurpassed in this area.

The main difference between the TVs in the range though is the colour performance. The 6000 and 7000 series are good at blues but everything else can look a bit flat – especially when sitting next to the 8000 and even more so, the 9000 series where bright colours seem to leap out of the screen thanks to Samsung’s “Quantum Dot” colour technology.