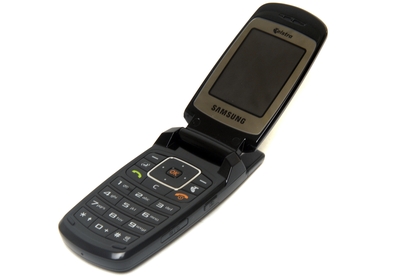 The A411 represents decent value for money, but don't expect this handset to provide rich multimedia, despite access to Telstra's Next G portal.

An entry-level prepaid phone built for Telstra's Next G network, the Samsung A411 performs quite well and represents good value for money. It's missing a few features but for its asking price, there will be few complaints.

Design-wise, the A411 doesn't leave much to talk about. It's a relatively plain looking handset, aside from the mirrored finish surrounding the external display and the ugly external antenna. We're not sure if the antenna has been built to provide extra reception, but it certainly doesn't do this handset any favours on the eye. Antenna aside, the matte black finish and sloped edges are sleek, but the lightweight of the handset does tend to leave it feeling a little flimsy.

Flipped open, the gloss black keypad and mirrored finish surrounding the internal display certainly appears to be a step up in quality. The keys are large, raised and comfortable to press and the controls are neatly laid out, making ease of use a priority. The display is disappointing though; it has a poor viewing angle and isn't as crisp or clear as most other handsets on the market, so don't expect a rich multimedia experience. In this price range though, it's hard to complain.

In terms of features, the A411 is about what you'd expect for a sub-$300 handset. There's a VGA camera, a media player that handles video and music, a voice recorder and a reasonable amount of PIM features consisting of alarms, calendar, memo, tasks, calculator, converter, timer and a stopwatch. There's no memory card slot though, so you'll have to make do with the 54MB of internal memory, which is bad news if you are planning to access plenty of multimedia.

Call quality is reasonably good and volume levels are adequate, even in noisy environments. The handsfree speakerphone also works well, though we'd recommend a Bluetooth speakerphone if you plan on using the A411 in the car. The handset is optimised for Telstra's Next G network, including the recently launched Mobile Foxtel service, but it's only rated at up to 1.8Mbps HSDPA, which is slower than some newer handsets that operate at 3.6Mbps and more recently, 7.2Mbps.

Battery life is average, rated at up to 150 minutes talk time and up to 200 hours standby time on a 3G network.