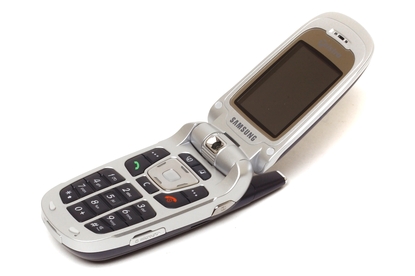 The Samsung A501 is a solid, but far from outstanding HSDPA-capable phone. While its compact size may be an advantage, outdated specifications in key areas mean that the A501 isn't able to fully immerse you in the Next G experience as it should.

Samsung's latest HSDPA (High-Speed Downlink Packet Access) phone is a flip handset and one of the smallest in the new range of next generation 3G phones. Running exclusively on Telstra's Next G network, the A501 combines an excellent user interface with a memory expansion slot, a rotating digital camera and access to the Next G content portal.

In-call volume and clarity was excellent and calls were crisp and clear for the most part. Video calls were reasonable and will be more than adequate for most people, but still don't offer the clarity that we'd like to see. In other areas the A501 is well covered, offering SMS, MMS, and e-mail messaging, all with T9 predictive text input. For e-mail, IMAP4 and POP3 protocols are supported.

The A501 comes with a 1.3 megapixel digital camera as well as Bluetooth and USB connectivity. Unfortunately, both are 1.1, rather than the newer and faster 2.0 interface, which is disappointing for a Next G phone. A proprietary USB cable is included in the sales package for connection to a PC.

The 1.3 megapixel camera can capture still images up to 1280 x 1024 pixels and video clips up to 176 x 144 pixels. Unfortunately, the A501's specifications are a bit of a let down; we expected more than a 1.3 megapixel camera on a Next G phone. The camera has 2x digital zoom and is located in the hinge of the handset. It can be rotated with your thumb, meaning there is no need for an extra camera for video calling. A small LED on the front of the handset acts as a flash, but despite this, the images produced are quite poor and night time photography is almost impossible.

Users can save images or video onto either the 40MB of internal memory, or the microSD card slot. Unfortunately there is no microSD card in the sales package, so you'll have to factor this cost into your purchasing decision. The camera also includes a video recorder that can record clips up to 60 minutes in length, but its quality is also well below average.

Another feature of the A501 is the integrated music player, which supports MP3, AAC, and AAC+ file formats. For Next G customers, there is also a Telstra Music Player, which allows you to download tracks through the content portal, directly to the A501.

Being a flip phone, the A501 naturally has dual screens. The monochrome LCD on the front of the handset has a 96 x 96 pixel resolution, while the main 1.9in LCD is 176 x 220 pixels and is capable of 262,144 colours. Once again these specifications seem a little dated. On a Next G phone with more content available for download at faster speeds, a larger screen with a better resolution would be preferred.

The A501 is pitched as a 'compact and small' HSDPA handset and it does a good job at living up to this title. It measures 88mm x 48mm x 26mm and weighs 114g, so it's on the smaller side for a 3G handset. The metallic blue and silver colour scheme, with chrome highlights surrounding the external display is a nice touch. We were disappointed with the protruding external antenna though, which adds bulk to the handset. Most new mobile phones have internal antennas.

The controls are fairly standard and the keypad is comfortable with good tactile feedback. The keys are well spaced and the rest of the controls are straightforward, comprising of a five-way navigational pad, two selection buttons, answer and end call keys and dedicated buttons for clear, video calling and applications.

Battery life is average according to Samsung's figures. The A501 is rated at 3.5 hours talk time and 320 hours standby time when using a 3G network. If you use the A501 on a standard 2.5G network, you'll get an extra 30 minutes of talk time. Generally, you'll have to charge the battery every two days.