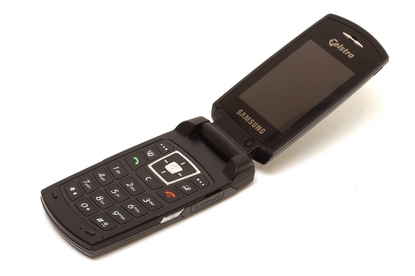 The proprietary headphone jacks and USB and Bluetooth 1.1 are a let down, however the A701 still remains a solid and well built handset with a good features list.

The A701 is the top of the line handset from Samsung and compatible with Telstra's new high speed HSDPA network: Next G. The clamshell A701 offers a 2 megapixel digital camera, MPEG4 video recording, a microSD memory card slot as well as Bluetooth and USB connectivity.

We were eager to see just how quick the new Next G network is and the good news is, we were pleasantly impressed. Browsing news or sports results, for example, was ultra fast compared to a regular 3G network; the loading bar was filled in just a second or two. Downloading music files was just as impressive, with download speeds quicker than we've ever seen them on a mobile phone before. Running at between 550Kbps and 1.5Mbps, with capacity for faster speeds in the future, it's clear the Next G network is fast and the A701 aims to bring it to the consumer in a stylish and thin package.

The A701 looks like an enhanced Z510, although not as thin. Aesthetically, the handset is quite attractive for a next generation 3G phone. Measuring 98.3mm x 51.5mm x 17.3mm and weighing 93g, the phone is surprisingly light and comfortable to pocket. Flipped open the A701 is quite long and wide and is one of the larger handsets on the market.

The A701 is cased in a glossy, dark grey plastic, with a matte black trim around the flip mechanism and keyboard. Samsung would have been wise to leave a gap between the two halves of the clamshell phone to slide your thumb into; we found it difficult to quickly flip open the A701 with one hand. Despite this, the flip motion felt sturdy and well built. Being a clamshell handset the A701 naturally has two LCD displays; the external 1in, 65 thousand colour screen and an internal 2.3in, 262 thousand colour display. We really liked the external display, even if it could have been a little larger. It shows time, date, battery life as well as new messages and caller ID information. The internal screen was bright and clear, so it's ideal for watching videos, using as a camera viewfinder and making video calls. Unfortunately the glossy nature of the display means sunlight reflection is a problem, as are fingerprints.

A dedicated camera button, external volume controls and a video calling button highlight the emphasis on multimedia functions, as do the illuminated touch sensitive music keys underneath the external display. As for the rest of the controls, there is a large five-way navigational pad, two selection buttons, clear, answer and end call keys and a dedicated application switching control.

The interior of the A701 certainly doesn't lack style and this also applies to the keypad. Although the keys are fairly flat, the gloss finish combined with excellent spacing between keys and a bright, white backlight ensures they are easy to press. We would have liked them to be a little more raised, but we experienced no major problems with messaging. Our only complaint was that like the internal display, the glossy surface around and in between the keys does result in excessive smudges and fingerprints.

Samsung has continued with their successful interface style on this model, and if you have used one of their newer phones you'll already be familiar with it. The menu system is very intuitive and offers animated, graphically intensive icons. The A701 once again uses a standard 4 x 3 grid system; selecting an item from the main menu item brings up a simple list format sub-menu.

The A701 is equipped with two digital cameras; an internally mounted VGA camera for video calling and an external 2 megapixel camera for taking photos and capturing video. The main camera can snap photos at a resolution of up to 1600 x 1200 pixels and also features 2x digital zoom. Unfortunately there is no flash, nor is there a self-portrait mirror and, like most mobile phone cameras, the quality isn't good enough for any sort of serious photography. The internally mounted camera can also be used for taking portrait photos, but as it only captures at a maximum of 640 x 320 pixels (VGA), its quality is poor for this type of use.

The biggest let down of this handset is the lack of internal memory. There is only 24MB of internal shared memory and with the Next G network focusing on high speed multimedia downloads such as music, applications and photos, 24MB is paltry to say the least. Thankfully, there is a microSD card slot on the right hand side of the handset for up to 2GB of storage, although a card is not included in the sales package.

The multimedia features of the A701 include a media player that supports a multitude of file formats including MP3, WMA, AAC, AAC+, and e-AAC+. A streaming media player is also present for video and audio streaming over the Next G network. The media player has basic settings such as shuffle and repeat playback as well as playlist support. The display can also be oriented horizontally when watching video clips. Perhaps the best feature of the music player is the external, touch sensitive music keys which illuminate on contact. You can start the application, close the flip and have access to play/pause and previous/next track keys; handy if you've created a playlist of your favourite tunes. Unfortunately the headphone jack only supports Samsung's included headphones, which are of below average quality.

Other features include Bluetooth and USB connectivity, with a USB data cable included in the sales package. The USB is only 1.1 rather than the more common 2.0 and consequently data transfers are slower than expected. The same problem exists with the Bluetooth, which is only 1.2 rather than 2.0, although the A2DP audio profile that allows wireless streaming of stereo music to compatible Bluetooth headphones is supported.

Other applications include PIM utilities such as a voice recorder, world clock, calculator and currency converter, Telstra's PocketNews service, a calendar and memo as well as Java 2.0 and a WAP browser. The Alarm function takes up a whole menu item on its own, with options for a Single, Daily and Wake Up alarms, all fully customisable. The A701 also provides support for SMS, MMS and email messaging and of course, T9 predictive text input is standard.

Surprisingly, according to Samsung's figures, battery life is fairly good on the A701. Up to 3.7 hours of talk time and up to 320 hours of standby time are provided. On average, you'll have to charge the handset every two to three nights, which is a good result for a phone with the latest 3G technology. Previous Samsung phones have been let down by poor battery life, so it's good to see things rectified on the A701.