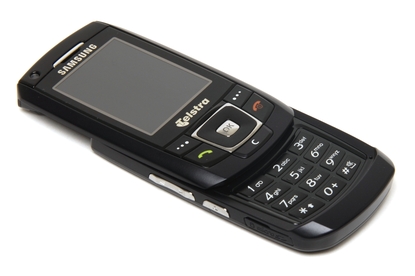 If you can handle having a poor battery life and a slightly slow menu, the Samsung A801 offers a great Next G compatible phone with a stylish, slim design.

Having popularised slim, slide phones with their early D-Series units, Samsung don't appear to be giving up on this design any time soon. Their latest product, the A801, offers an almost identical design to their earlier D900 model, but packs in Next G network connectivity and an improved camera. For mobile enthusiasts who need high fast data transmission while on the road but don't want to sacrifice style, the A801 is a great choice. It does have some issues with battery life and general operating speed, however.

As this phone comes standard on the Telstra Next G network, the two shortcut buttons default to Foxtel and Bigpond links. Having the ability to tune in to a variety of your favourite Foxtel channels anywhere you want is a pretty cool feature. However we'd advise you don't go overboard. For example, it certainly isn't suitable for watching South Park at your desk while at work. The unit took about 30 seconds to get a connection up and running, but once it began streaming we experienced no stuttering or timing out. The video quality was about what you'd expect; a lot of detail was lost due to compression and video is only going to look so good on a 240x320, 2.12in display, but all things considered, the LCD did a great job. Obviously you won't use the A801 as a standalone TV watching device, but for the occasional bout of The Simpsons on public transport, it's a decent solution.

Next G connectivity also offers speedier web surfing and general data transfers which will be a key feature for mobile professionals or those that simply can't bear the thought of being offline. Depending on which plan you're on, Next G has a practical maximum speed of anywhere from 256kbps to 1.5Mbps, which is more than quick enough for any internet surfing you want to do. It depressed us a little bit to discover it was actually faster to do our research using the A801 than our office internet connection.

The web browsing software is quite comprehensive and helps deal with the limitations of a 2.12in screen rather well. You can view pages either at the regular 'desktop size', which results in only a small part of the page appearing at once, or you can make the whole page fit to the display, which condenses everything to the width of the screen. This function wasn't flawless as some sites we visited didn't compress properly, but in these cases we simply activated desktop view and then used the nifty zoom button to zoom out until we could see everything we needed.

Aside from Next G connectivity, the A801 is a fairly standard Samsung phone. The menu and interface is extremely intuitive and everything is labelled with icons that leave little doubt about what is what. Unlike some other recent Samsung units though, this one is a little sluggish. If you move around the menu quickly, the indicator telling you which icon you've select disappears entirely, and there is a second or two of lag before it positions itself appropriately. We also experienced similar slowdown when the phone loaded graphically complex web pages; this wasn't to do with the connection but rather, the handset's inability to handle so much data at once.

The features list is robust, with basically everything you could ask for. This includes a calendar, alarm, to-do list, converter, timer, stop watch and voice recorder. There is also a media player which can play back audio or video files from the unit's 50MB of internal memory. However media enthusiasts don't despair, there is also a microSD card slot to further expand the storage capacity if required.

Another noteworthy feature of the A801 is the included camera, which clocks in at 3 megapixels. While still not a replacement for a standard digital still camera, it is more than adequate for the occasional happy snap. Colours were reasonably well balanced, although the pictures could have been a little sharper. There is also a second 640x480 camera mounted on the front for video calls or quick portrait shots.

Aesthetically, the A801 is quite stylish. It closely resembles older Samsung slide units such as the D900, but has been trimmed down a little more. Measuring just 51.3mm x 104.5mm x 13.8mm and weighing 79g, it is an extremely slim device that slips easily into your pocket. At the same time, the slick black aesthetic will please fashion conscious buyers. The slide mechanism operates smoothly and is easy to open and close. The keypad is well spaced out and easy to type on.

Call quality was good both incoming and outgoing and the speakerphone operated well. We were however a little disappointed by the battery life. Samsung quote 170 minutes talk time and 230 hours standby when on a 2G network, however this drops to 140 minutes and 180 hours when running 3G. These figures are slightly behind the competition and mean you'll likely have to charge the handset daily if you're a high volume user.