A compact slider with an unusual design 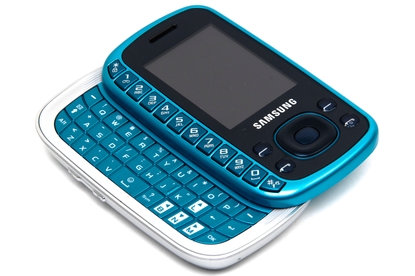 The Samsung B3310's oddly positioned numeric keys makes for an unusual device, and mean that it's awkward to dial phone numbers with the slider closed. This compact and quirky mobile phone possesses a good keyboard and a decent screen, but its lack of 3G connectivity is hard to swallow.

A compact slider with a strange looking number pad running down its left side, the Samsung B3310 mobile phone certainly can't be accused of being dull. A three-row, slide-out QWERTY keyboard, quirky colour scheme and sharp display hint at good things, but the lack of 3G connectivity is too much to swallow — even at this price.

The design of the Samsung B3310 mobile phone is quite unusual, thanks to the number keys running from top to bottom on the left side. Their position makes it rather awkward to dial someone with the slider closed, so it's best utilised in landscape mode. Unfortunately, the phone's screen doesn't rotate when the it is tilted, only when the slider is opened.

One advantage of this design is that you won't need to use an Alt or Shift button to type numbers when you are using the QWERTY keyboard. The flat keyboard is surprisingly comfortable and each key emits a reassuring clicking sound when pressed. Our only complaint lies with the position of the ?/Sym key — this means the B, N and M keys are pushed further to the bottom-right of the keyboard than we're used to.

The Samsung B3310 is controlled via a large five-way navigational pad, two selection buttons and answer and end call keys, all situated below the display. The screen itself is bright and clear, and it possesses reasonable viewing angles. Its performance in direct sunlight leaves something to be desired, however. We also would have appreciated a larger display — even in landscape mode with the slider opened, the B3310's screen is a little too compact for our liking.

The Samsung B3310's largely plastic body feels reasonably solid, though this isn't a phone we'd be comfortable treating roughly. The spring-operated slider clicks effortlessly into place, and there are no parts of the phone that rattle or creak when pressed.

The B3310 runs a proprietary Samsung OS that is fast, responsive and easy to use. A nice touch is the shortcut bar that runs across the bottom of the home screen — you can customise a number of shortcuts including messaging, music player, organiser and Facebook. Conveniently, opening the slider automatically launches the create message menu in preparation for an SMS or MMS.

With a comfortable QWERTY keyboard and landscape display, it’s a real shame the Samsung B3310 lacks 3G connectivity. It does include a basic Web browser and shortcuts to social-networking sites like Facebook and MySpace, but at GPRS speeds, this certainly won't be a pleasing experience.

The rest of the B3310's features are fairly uninspiring, even if we didn't expect too much more at this price. A 2-megapixel camera that doubles as a video recorder, Bluetooth with A2DP, and an MP3 player are reasonable multimedia features for an entry-level prepaid mobile phone. The lack of a 3.5mm headphone jack is disappointing. The Samsung B3310 has 40MB of internal memory, but a microSD card slot located under the battery.