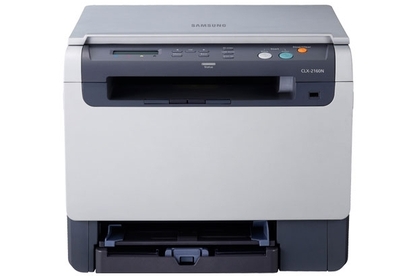 Mostly a very good MFD for the money, the CLX-2160N offers good quality, features, and performance at this level. It's a shame it's marred by the slightly skimpy paper catch and paper curl.

Many moons ago, when PC companies first started extolling the virtues of the multifunction device, the main selling point appeared to be its ability to save space. Rather than buy a separate printer, scanner and copier, you could get all of this functionality shoe-horned into just one wonderfully compact product.

The first MFDs were hefty and rather overbearing. But fast forward a few years and we can see exactly why the original idea seemed so enticing. The very multifunctional CLX-2160N isn't a great deal larger than standard colour lasers. In fact, if you look at the likes of the Konica Minolta Magicolor series, you'll see that some colour lasers even take up more space than the CLX-2160N.

Not that the wonderfully honed design isn't without its flaws. Where colour lasers typically have a heavy-duty output tray built-in to the top of the printer, the CLX-2160N has a flatbed scanner. The solution to this compromise is a rather skimpy paper catch protruding from the printer. This doesn't take up much room, but neither is it a foolproof method of ejecting pages. In fact, we experienced quite a few problems with paper not dropping out properly. The CLX-2160N also has a tendency to curl paper.

These drawbacks are disappointing as, otherwise, this is a very good MFD. Print speeds are pretty fast and give the $450-$580 standalone colour lasers a good run for their money. Print quality is good as well, and graphics are packed with colour. Text output isn't quite as crisp as on the best lasers, although the lettering was mostly pleasingly dark. Scans are fast and realistic and the special ID feature is very nice - allowing you to quickly scan both sides of a business or ID card to a single sheet of paper.

You get network facilities as standard on this model (pay $150 less for a non-network version), and you can use the Direct USB port to take images from a USB drive.