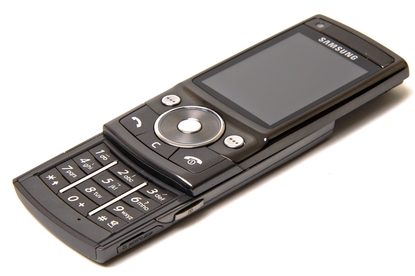 Aside from the 5-megapixel camera, the G600 doesn't offer anything outstanding. Regardless, if you can live without 3G then there isn't too much else wrong with this handset.

Claiming to be the slimmest and most compact 5-megapixel camera phone currently available in Australia, the Samsung G600 is certainly an attractive and sleek handset. Although not overflowing with features, it still possesses a multi-format audio and video player, a crystal clear 2.2in LCD and an automatic light sensor which aims to save battery power.

At the heart of the G600 is a 5-megapixel camera with autofocus, an LED flash and 4x digital zoom. The lens is hidden behind the slider and a dedicated camera button on the right means you can capture photos in landscape mode -- much like a regular digital camera. Surprisingly, most of the photos we took with the G600 were sharp and had quite a good level of detail for a camera phone, although the auto-focus is sometimes erratic. Although the LED flash works well for night-time photography, it doesn't truly compensate, so photos under dark light conditions are a mixed bag.

Perhaps the biggest disappointment of the G600 is the fact that it is only a regular quad-band GSM handset. With no support for 3G, you won't be browsing the Internet too often. Despite the lack of 3G connectivity, the G600 handles voice calls quite well and volume is loud enough at its highest setting -- both on the earpiece and when using the handsfree speakerphone.

The G600 is definitely an attractive looking handset, so fashionistas will be impressed. Be warned though -- the glossy surface does attract plenty of fingerprints. The front features a stylish, gloss titanium finish, while the rear is coated in a light shade of grey. The handset is comfortable to use and the button and keypad layout is convenient and practical, making messaging a breeze.

Samsung phones are usually noted for their excellent user interfaces and the G600 is no different. Aided by an excellent display, the menu layout is convenient -- encompassing a simple list format for most sub-menus and labelled icons for the main menu. The speed of the interface is excellent and the transition effect between menus can be altered which is a really nice touch.

The included media player supports a multitude of file formats and has basic settings such as shuffle and repeat playback and playlist support. There is also an FM radio. The included headphones are proprietary but the sound produced is decent. One annoyance of the G600 -- and most Samsung handsets -- is the insistence on a single port for charging, synchronising and headphones -- meaning you can't do any of these simultaneously. The G600 includes 52MB of internal memory but an included 1GB microSD card should handle most of your storage.

Bluetooth 2.0 with the A2DP profile and USB connectivity round out the package, while other applications include PIM utilities such as a voice recorder, image editor, memo, task, calculator and currency converter.