Is the evolution of the S6 any good? 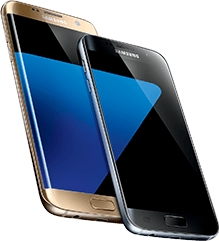 It's priced to ride the coat tails of the iPhone. But while it is a very good Android device, there is much better value to be had elsewhere.

This phone has appeared in our Top Rated Android Phones in 2016 list and Which phones have the best cameras? list.

Samsung’s mobile division has been feeling the squeeze recently. Last year’s top-tier smartphones, the Galaxy S6, Galaxy S6 Edge and 2014’s Galaxy S5 all failed to meet sales expectations while competitors like China’s Huawei continued to eat away at the low-to-mid range end of Samsung’s business. Now Samsung is looking to the Galaxy S7 and S7 Edge to reinvigorate its sales in 2016. But how good are they?

What makes a good smartphone? For many people it’s the camera, battery life, screen and speed but from a vendor’s perspective it first and foremost has to look good and feel great in the hand - especially when people are paying top dollar for the handset.

The S7 continues the design language of its S6 predecessor, but with some subtle improvements. The edges of the phone are now curved making it easier to hold in the hand, the bezels have been narrowed and the protrusion of the camera lens has been reduced to a point where it’s almost flush with the metal back.

But when it comes to looks, the S7 Edge is the star of the show with its curved screen which seamlessly melds into the metal alloy frame. It’s a head turning piece of design that is just as impressive as it was last year. The curved screen also makes bezels invisible when watching content. With a 5.5-inch screen, the Edge veers into phablet territory, but it feels much smaller in the hand than the iPhone 6 Plus.

Our main qualm is that the smartphone is a fingerprint magnet so be prepared to give the phone a regular wipe down. Thankfully, this year’s models are water and dust resistant so you can even give it a rinse if you feel brave enough. Some people in our office also complained about regularly and sporadically hitting keys with the palm of their hands on the side of the screen which will annoy some.

Not much has changed in the screen department. It’s the same Quad HD Super AMOLED 2560 x 1440 display from last year, however, it is noticeably brighter this time around and performs better under direct sunlight as a result.

The screen never really shuts off – an Always-On feature keeps the time, date, calendar, missed calls and text message notifications displayed on screen whenever the handset is not in use. Unfortunately, it won’t display notifications from third party apps.

AMOLED technology consumes relatively-little power when the screen is dark so you’re actually likely to save more battery life having Always-On enabled as it stops you from having to wake up the phone every time you want to check for notifications. We found this to be consistent in our testing, where it only consumed about 1% of the battery-life every hour.

Samsung omitted the microSD card slot in last year’s model but now the SIM card tray has been expanded to accommodate one, allowing you to add up to 200GB of additional storage.

If you plan on taking many pictures and shooting a lot of video (particularly in 4K) this is a handy feature. However, it’s worth remembering that microSD cards will only work with apps that specifically support external storage. For example, Spotify and Google Play Movies allow you to use the microSD card for storing offline content, but Google’s own Play Music service does not.

The absence of a Qualcomm chip does mean that the S7 misses out on the newer Quick Charge 3.0 tech which offers ‘four times faster charging’ than version 2 which is what we get here. Still, we were able to go from dead flat to 50% battery in just 40 minutes using the included charger on the Edge which boasts a decent 3600mAh battery. Expect faster charging results with the S7’s slightly-smaller 3000mAh battery. Both handsets also offer integrated support for fast wireless charging.

The jump in battery sizes on both handsets resulted in noticeably-longer stamina with the Edge lasting more than 24 hours of fairly-heavy use which included close to five hours of screen-on time. When the day was done, it still had 12% left in the tank. The S7s also include Samsung’s excellent Power Saving and Ultra Power Saving Modes. The former dims the screen and makes little difference to operation while offering hours of extra battery. The later significantly reduces functionality but can stretch battery life out by days.

Read more Which telco has the best Galaxy S7 plan?

The camera was one of the real highlights of last year’s S6 and the S7 builds on that foundation by ramping up the autofocus speeds and low light performance. In doing so, Samsung has had to drop the megapixel count to 12, but we think the tradeoff was well worth it.

In our testing, we found the S7 camera focused faster in low light and also captured more detail without blowing out the highlights compared with last year’s effort. The S7 also captured more of the scene and with better sharpness than the iPhone 6 Plus. What’s more, the faster auto-focus made capturing moving subjects a less-blurry affair.

Samsung’s image processing does tend to over sharpen the image which can become noticeable when you start to zoom in on images. However, as far smartphone cameras go, this is as good as it gets.

Samsung has long been criticised for its kitchen-sink approach to its custom Android interface, TouchWiz, but since the S6 it has been reining the clutter in with a cleaner and more-streamlined UI.

The S7 launches with Android 6.0 Marshmallow which means you get features such as Google Now on tap, but you also get a number of other useful TouchWiz extras. Some favourites include the ability to run two apps in split-screen mode, identifying unsaved numbers and ‘Adapt Sound’ which actually makes a noticeable difference to the audio quality when enabled. There’s also a game launcher which allows you to turn off alerts and optimise battery performance during gaming sessions.

The main problem TouchWiz suffers from is duplication - do we really need two app stores, two browsers, two email clients, two photo viewers and two messaging services? There are also some bundled apps from Microsoft which can’t be uninstalled.

But the extra software weight doesn’t appear to hold the S7 back. It’s still slick, fast and very stable. We’ve been testing the S7 Edge for an entire week and in that time we only experienced one app crash.

Samsung hasn’t reinvented the wheel with the S7 and S7 Edge. They are iterative updates which build on the strengths of last year’s offering while also addressing shortcomings. The S7 and S7 Edge have improved battery lives and cameras along with new features like water resistance and expandable storage. If you’re trying to decide between the two models, our recommendation would be to spend the extra $100 and get the S7 Edge unless the shallow sides are likely to bother you.

Both handsets don’t come cheap, however, with the S7 retailing for $1,149 and the Edge coming in at $1,249. The price sting is somewhat softened with the inclusion of the Samsung Gear virtual reality headset that comes bundled for early buyers.

For those that can look past the cost, this is a handset that is hard to put down.

Read more: The best smartphones of 2015: What a year for comebacks