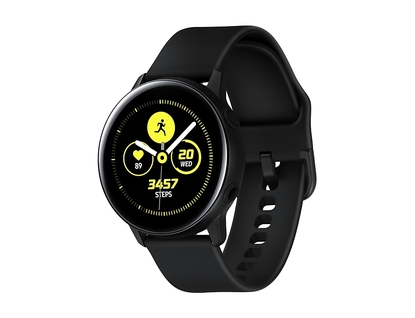 The Samsung Galaxy Watch Active does more with less but, at the end of the day, you’re still left with less.

At a glance, it’s the closest that Samsung have gotten to its ultra-sleek Apple-branded competition. Unfortunately, not all of the ways in which it breaks from tradition make for a better product and experience for the user. It ticks most of the same boxes as its namesake but most isn’t all.

And, ultimately, the Galaxy Watch Active lives or dies on its looks. No matter how you slice it, that’s a dicey way to go and the dazzle factor here is nothing if not fleeting.

Apple Watch-like aesthetics aside, the easiest way to break down the design of the Galaxy Watch Active is into additions and subtractions.

And, unfortunately, while that distinct difference in design is only the most visually-noticeable thing that’s been cut, it’s far from the only thing.

The Galaxy Watch Active features a smaller display (though the absence of the bezel controller does sometimes make it feels bigger than it actually is), a smaller battery and no cellular connectivity. None of these subtractions alone are deal-breakers but together their impact on what you can actually do with the Galaxy Watch Active is felt rather fast.

The previous Galaxy Watch was a smartwatch that got most of the way there when it came to matching the Apple Watch for functionality but fell short on aesthetics. By contrast, the Active looks the part but isn't nearly as versatile.

Read more How to get Google Assistant on your Samsung smartwatch

Of course, it should be said that the side-effect of these subtractions is a much lower price-tag. The Galaxy Watch Active comes in about $150 cheaper than its predecessor - which is going to make it a lot more affordable (and appealing) to a lot more people who couldn't afford its pricier predecessor.

While the Galaxy Watch Active does lack the rotating bezel that was the primary method of interacting with the previous Galaxy Watch, the overall experience here isn’t that different. The menus and UI of the software here has been given a tune-up to line up with the One UI rework that hit Samsung’s Galaxy smartphones earlier in the year.

You're also getting a lot of the same limitations. When it comes to third-party software, the Galaxy App store remains an empty spectacle. You've some big names like Spotify and Uber but it feels like they're only there because Samsung inked deals with them a few years back. if you're any other ride-sharing or music streaming service, you're out of luck. And beyond the basics, things don't get much better.

If you're looking at the Galaxy Watch Active as a premium fitness tracker with a few smartwatch features, you might be able to get away with it. If you're imagining something more ambitious, you're probably going to end up a little frustrated.

Credit where it’s due, the aesthetics of the Galaxy Watch Active leave an incredible first impression.

As a gadget showpiece, it’s gorgeous to behold and it does deliver on that ever-alluring tagline of being thinner and lighter than its predecessor. It does more with less but, at the end of the day, you’re still left with less. Tally together the additions and subtractions and the sum total here ends up moving backwards more than it does forwards.

I can easily imagine a lot of people who come away satisfied by what the Galaxy Watch Active does do (and does well) but I can just as easily imagine someone strapping this thing on, using it for a couple of hours and coming away with a lingering thought:

If you’re more of an over the long-run kind of person, you’re probably going better served by the mainline Galaxy Watch or - better yet - whatever comes next. But if the compromises that the Galaxy Watch Active asks for are ones you’re willing to make (and you’re not an iPhone user), it’s still (easily) one of the most polished smartwatch experiences you’ll be able to find for the price.