Samsung Galaxy Note review: The appeal of the Galaxy Note will depend on whether you can handle its large size The Samsung Galaxy Note is an interesting device that’s been designed as an all-in-one smartphone and tablet. Whether it holds any appeal will depend on you getting your head (and hands) around its mammoth size. If you’re comfortable with the design of the Galaxy Note, you’re left with a phone that has a brilliant display, excellent performance and slick software.

With a huge 5.3in touchscreen and an included stylus, you would be forgiven for thinking the Samsung Galaxy Note is a tablet. Samsung, however, is positioning the giant device as an all-in-one smartphone: big enough to function as a tablet, but small enough to be classified as a smartphone. Ultimately, whether the Samsung Galaxy Note is the right phone for you will depend on getting your head (or hands) around its sheer size.

UPDATE: The Galaxy Note was officially launched in Australia in mid-March. It is available now through both Optus and Vodafone, and will be available through Telstra in April.

The Samsung Galaxy Note is big. Very big. It measures almost 150mm tall and 83mm wide, so it does feel awkward to hold single-handedly. It also looks strikingly odd when held up to your ear on a phone call. If, like us, you have average sized hands then you're more than likely going to find the Galaxy Note too big to use as your primary smartphone.

We found the Galaxy Note uncomfortable when trying to touch the other side of the screen with one hand — moving your thumb across the radius of the screen is a stretch. However, whether you find the Galaxy Note too big will depend on your hands: each and every user will be different so the appeal of the Note should be measured on a case by case basis. Some users will love the size, others will hate it.

The Galaxy Note's sheer size may be too big to handle for some but Samsung deserves plenty of credit for a great design. For starters, the Note is just 9.7mm thin. As a comparison, the Apple iPhone 4S is 9.3mm thin and Samsung's own Galaxy S II is 8.5mm thin, so there's not a huge difference. When you take its extra large footprint into consideration, the Galaxy Note is quite thin and light. 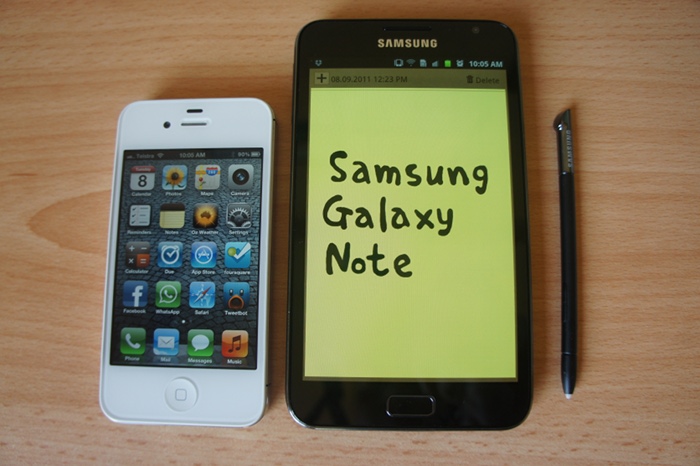 Make no mistake, the Samsung Galaxy Note is big. Here it is alongside the iPhone 4S.

The Samsung Galaxy Note has minimal hardware buttons. On the right there is a power/lock key and on the left a volume rocker. Both of these keys are high along the side of the Galaxy Note: we think they would have been better off slightly lower, as this would have made them easier to access with one hand given the large size of the phone. The Galaxy Note looks similar to the Galaxy S II: it's basically a larger version of that chassis. Like its smaller sibling, the Galaxy Note has a thin, plastic battery cover that feels flimsy when removed, but its etched finish once again makes the device easy to grip.

The advantage of Galaxy Note's size is all the room it's left to include a 5.3in Super AMOLED HD display. The screen has a whopping resolution of 1280x800, making it a WXGA panel with 285 pixels per inch (ppi). That's a notch below the iPhone 4S's "retina" ppi of 326, but it's a massive improvement over many other Android phones on the market, including Samsung's own Galaxy S II. The sheer size of the screen naturally makes it a great device for reading, Web browsing and video playback: colours are vibrant, text is crisp and visibility in sunlight is excellent. Our only issue is that some apps in the Android Market don't scale correctly (most notably the game Doodle Jump) and can appear pixelated. We suspect this issue may be corrected when the Galaxy Note is upgraded to the latest 4.0 "Ice Cream Sandwich" version of Android in the coming months. 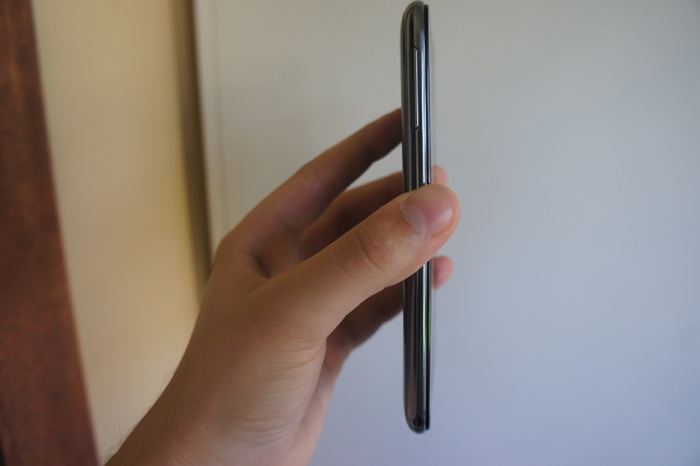 Despite the Galaxy Note’s large size, its actually a pretty thin smartphone.

Steve Jobs hated the mere thought of a stylus, but that's exactly what Samsung has included on the Galaxy Note. Called the "S-Pen" (Samsung doesn't seem to like the word stylus either), it's stored in the bottom right of the phone and allows users to take notes and draw onto the screen.

The S-Pen is a little tough to remove — you've really got to dig your fingernail in the slot to pry it out — and it's also a bit short for our liking so it doesn't feel like a real pen. That being said, it's reasonably comfortable to hold and is both accurate and responsive. It's also pressure sensitive. When drawing or writing there's only a very slight delay before the text appears on the screen. The lag is particularly noticeable when you move around quickly, for example if you are scribbling on the screen. It doesn't really detract from the S-Pen feature on the whole but it's definitely a noticeable issue.

The S-Pen has a small button on it that provides some extra functionality, but the design of the button is poor. It's not raised so you can't feel it without having to look for it and it requires a pretty firm press to activate, too. The button enables you to capture a screen shot while pressing it and holding the S-Pen on the screen, and will also bring up a quick memo app by holding it and double tapping the S-Pen on the screen. Once you’ve grabbed a screenshot, the S-Memo app will immediately open allowing you to draw, scribble and write on the image and then immediately save it or send it via e-mail, SMS, Bluetooth or a number of other methods including uploading it to Facebook or Twitter. You can also press the button on the S-Pen and swipe the pen backwards to go back in a menu, or do the same and swipe up to open an in-app menu. 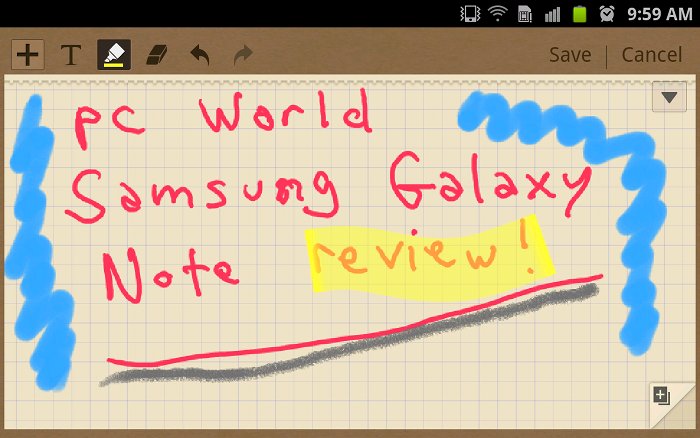 Samsung’s S-Memo app allows you to draw and write with the S-Pen. You can select four different pen types and multiple colours.

In addition to drawing and scribbling on-screen with the S-Pen, the Samsung Galaxy Note features handwriting recognition, which means it will type words and letters you write. Results are hit and miss: you really need to write as accurate as possible to avoid mistakes. This is hard to achieve if you want to jot down some quick notes in a meeting, for example. Unfortunately, handwriting recognition is a feature of the Samsung keyboard, so using another keyboard (like the included Swype) removes it.