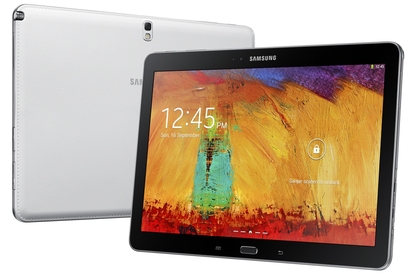 The Galaxy Note 10.1 2014 Edition (this is a really terrible name) naturally has upgraded specifications from last year's model, but the most notable new addition is the screen. The super clear LCD has a high resolution of 2560x1600, the same as the impressive Google Nexus 10. It's a significant upgrade from the 1280x800 resolution of its predecessor and Samsung says it delivers four times the pixel density of that model.

Another upgrade from the previous model is an all new look and feel, one that's borrowed directly from the Galaxy Note 3. While we're not sure it "inspires a sense of elegance" as Samsung suggests, the soft, textured back with stitching around the edges looks like a nice upgrade from the company's usual glossy, slippery plastic. The new Galaxy Note 10.1 also has a "serration pattern" on the sides that gives it a metallic look, even if it's still plastic.

The Galaxy Note 10.1 2014 Edition also has an upgraded S Pen stylus and new software features, most of which are the same as the Galaxy Note 3. The key feature is Air Command, a circular menu that pops up every time you remove the S Pen from the tablet, or when you hover the S Pen over the screen and press the command button on the pen.

From this Air Command menu, users can access four new S Pen features including Action Memos, Pen Window, S Finder and Scrapbook. Most of these appear to be typical Samsung gimmicks that you won't end up using very often, though Pen Window appears to be the best of the lot. It allows you to draw a box of any size on the screen, and open another app inside the window as an overlay on the current screen. The Action Memo feature is also worth noting, letting you handwrite a note, and convert it into formatted content.

Samsung's S Note app has been upgraded and now synchronises with popular note taking application Evernote. Perhaps the best feature is the fact the S Pen is now symmetrical. This means it can be stored back in the Galaxy Note 10.1 2014 Edition without having to sit the correct way up like the previous model.

Other software features include a revamped Multi Window feature that allows you to run two apps on the screen simultaneously, and drag and drop content from one window to another.

The Galaxy Note 10.1 2014 Edition is powered by a 2.3GHz quad-core Qualcomm Snapdragon 800 processor, has a whopping 3GB of RAM, and comes in three storage capacities: 16GB, 32GB or 64GB. A microSD card slot on the right side allows for memory expansion. The tablet runs the latest version of Android, 4.3 Jelly Bean, and is skinned with Samsung's TouchWIZ UI overlay.

Other features include a 8-megapixel camera that can record 1080p video at 60fps, a non-removable 8220mAh battery, and Samsung's KNOX enterprise security solution.