Samsung Galaxy S III review: Is the hype warranted for the most anticipated Android phone of 2012? The Samsung Galaxy S III may not have deserved all of the hype that came with its release, as this is an evolutionary smartphone rather than a revolutionary one. Regardless, Samsung's combination of impressive hardware and excellent, intuitive software makes the Galaxy S III a very compelling package. Definitely the most impressive smartphone on the market right now.

Much has been said about the Samsung Galaxy S III's design, with critics deriding its rounded nature and blasting its plastic construction. We can put any fears you might have to rest and assure you that in no way, shape or form does this feel like a cheap phone. Samsung's choice of polycarbonate plastic doesn't creak or rattle when pressed and the fit and finish is as good as most flagship smartphones on the market. The glossy surface does attract plenty of fingerprints, but our "marble white" review unit managed to mask these quite well.

In opting for a rounded shape Samsung appears to have prioritised comfort over looks, even if the latter is a very subjective matter. The Galaxy S III's contoured back and curved edges make it very comfortable to hold. This is a large handset but it is much easier to use single-handedly than its major competitor, the HTC One X. It's still a stretch to extend your thumb towards to the top of the screen, but the Galaxy S III's ergonomics feel far more impressive than most of its competitors. 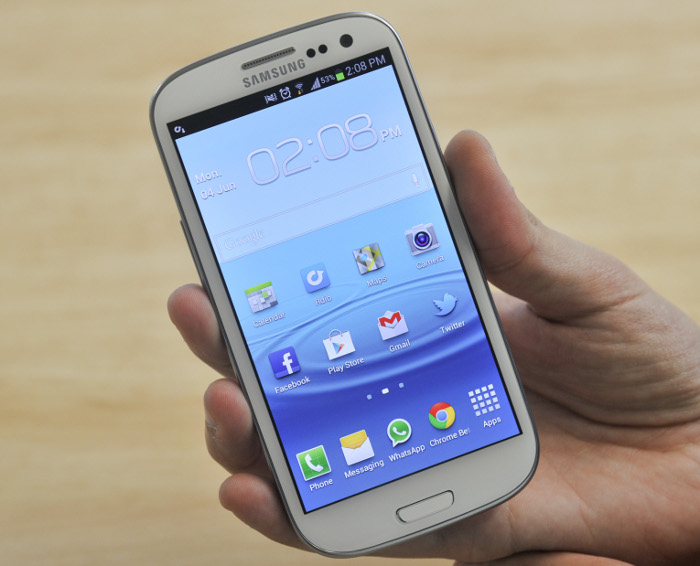 The Samsung Galaxy S III uses the same button layout as its predecessor. A physical home button is flanked by backlit, capacitive menu and back keys. The capacitive keys are responsive but the home key is a little thin and needs to be pressed right in the centre to ensure the best tactile response. The power button on the right side and the volume rocker on the left are responsive and perfectly positioned for one-handed use. 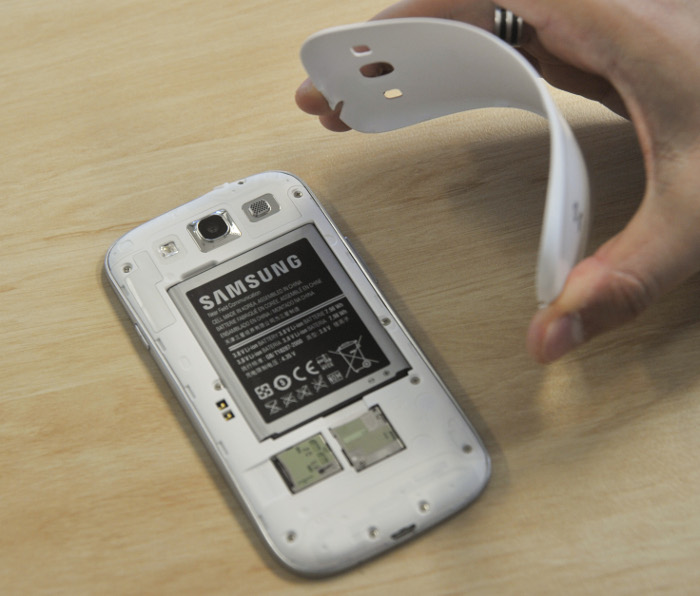 Samsung has followed the "bigger is better" trend that appears to be swamping the smartphone market. The Galaxy S III has a large 4.8in Super AMOLED HD screen. It's a bright and clear display that offers great colour reproduction, crisp text and excellent viewing angles, making it one of the best on the market. It has a slightly less pixels per inch rating (306ppi) compared to the HTC One X (312ppi), but it doesn't feel inferior. However, we feel the One X performs slightly better in direct sunlight. Further, the auto brightness feature on the Galaxy S III seemed erratic, immediately dimming or brightening the screen in one huge transition rather than a smoother, gradual adjustment. The notification LED, cleverly hidden above the screen and only visible when lit, is a classy touch and a feature we quickly came to appreciate during daily use.

A Galaxy of TouchWIZ

Samsung's promotion of the Galaxy S III (notwithstanding the ridiculous catch tag of "designed for humans") has centered largely around how people interact with the device. The Galaxy S III may have class-leading specifications like a huge screen and an excellent camera, but Samsung is clearly banking on software innovation to win over consumers.

For most part, the Galaxy S III is a very intuitive smartphone to use. Samsung's latest version of TouchWIZ, the user interface layer that sits over the top of the Android 4.0 Ice Cream Sandwich UI, is impressive. This is a super fast phone with no evident lag in basic user operations, like swiping through home screens, scrolling through lists, opening Web pages in the browser and closing apps. We particularly noted the fact that the Galaxy S III scrolls through home screens without any lag, even if we filled the screens with as many widgets as possible. This home screen lag is a common issue with many current Android phones on the market.

Aside from offering good general performance, there are a few usability features of TouchWIZ that are really impressive. Direct Call, the ability to call a contact you are currently messaging by simply holding the phone up to your ear, is a clever feature we quickly came to appreciate. A similar verdict can be made for Smart Stay, which uses the phone's front facing camera to determine when you are looking at the screen, refusing to timeout in that case. It was slightly erratic during testing and didn't always work properly when in good light, but for the most part it functions as advertised. 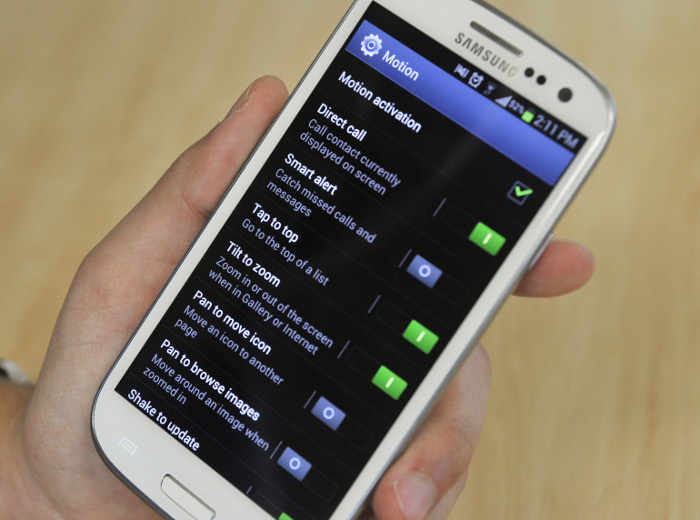 Turning the phone over on a desk or table to mute an incoming call, placing your hand on the screen to pause a video, and swiping your hand over the screen to capture a screenshot are also nice features of the Galaxy S III, though not as handy or noteworthy as some of the other TouchWIZ offerings. A good example is Smart Alert, which vibrates and flashes the notification LED when you pick up the phone if you've missed a call or text message.

The features list doesn't end there. The Galaxy S III comes with 50GB of free Dropbox storage for 24 months. This is an excellent deal that is a real value add, especially if you don't want to invest in a microSD card to add to the 16GB of internal memory. We love the toggles in the notifications window for Wi-Fi, GPS, sound mode, screen rotation, power saving, Bluetooth and more. The settings shortcut in the notification window is a nice touch, as is the ability to access four shortcuts on the lock screen. You can swipe right on a contact to call and swipe left on a contact to message, hide unwanted apps in the menu, and directly access missed call and message notifications from the lock screen.

Despite an impressive features list the Samsung Galaxy S III isn't perfect. We often experienced a 1-2 second delay when pressing the power or home button to wake the screen from sleep, especially if we hadn't used the phone for a time period. We've seen the same issue on both the Galaxy S II and the Galaxy Note so it appears Samsung hasn't resolved this relatively minor problem. We also experienced lag loading the home screen after pressing the home button, particularly if we had been using the phone extensively. Samsung's re-designed settings menu isn't always obvious, either. The option to edit lock screen shortcuts is annoyingly hidden in the security menu rather than the display menu, for example. 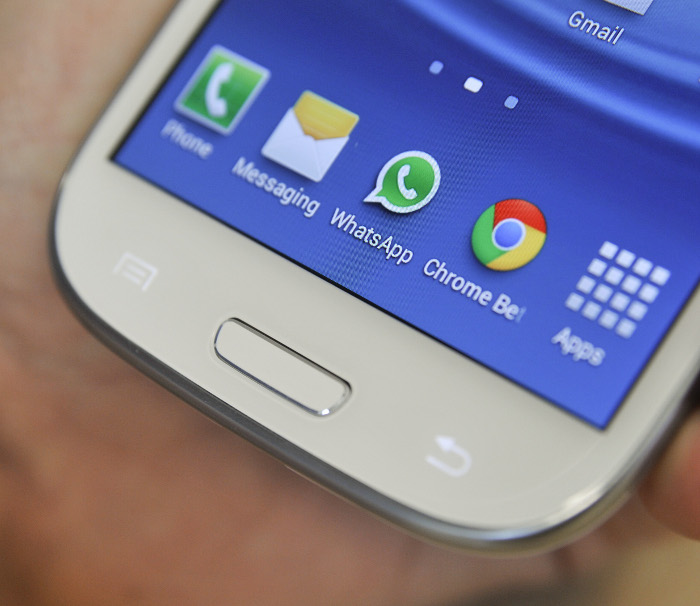 In addition, there's a few TouchWIZ features that either aren't impressive or don't work as intended. The most disappointing is S-Voice, which is a Siri-like voice recognition feature that can be configured to control various features of the phone. S-Voice works reasonably well enough for basic tasks like setting a calendar appointment or an alarm, asking for a weather forecast or opening a native Samsung app, but it's not accurate enough for more advanced functions. These include sending a text message to one of your contacts, navigating to an address using Google Maps Navigator or asking random questions. It particularly struggled to understand street names and people's names and we found it often cut us off in the middle of a sentence or phrase. In short, it's really not an adequate selling point of the Galaxy S III.

Other heavily marketed Galaxy S III features simply feel like gimmicks. We like the idea of "Pop-up Play" which allows you to watch a video in a small window that can be dragged anywhere on the screen. The idea is that you can perform another task, such as send an SMS, set an alarm, or read a message while still watching uninterrupted video. This feature admittedly works well and is an impressive demonstration of the Galaxy S III's powerful internals at work. However, we can't really think of one legitimate real world use scenario that would make this a sought after feature. The same can be said for social tag, which automatically recognises faces in your photos. We found it was inconsistent at recognising our contact images and there appears to be no real benefit to the tags.

Finally, Samsung's default Web browser loads pages quickly, but the lack of text reflow is an annoyance, especially if you're coming from a phone with this feature. We also dislike the fact that you need at least three touches to access any open tabs. 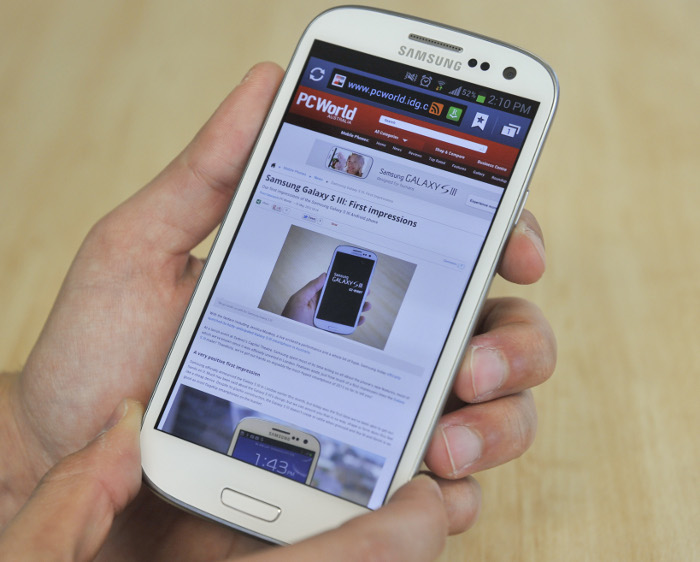 The Galaxy S III is equipped with an 8-megapixel rear camera that doubles as a full HD 1080p video recorder. While it won't replace a dedicated point and shoot camera if you are after top quality images, the Galaxy S III is a genuinely impressive phone camera. It captures a high level of detail, produces pictures with excellent colour reproduction and offers a wealth of settings. These include Best Photo, which takes 20 shots in burst mode (six photos per second) and uses software algorithms to select the best photo and Face Zoom, which recognises individual faces and zooms in to take a photo of them. The Galaxy S III's camera can also take still photos while recording video. This was a feature first seen on the HTC One X, though the Galaxy S III doesn't negate the need to switch between video and photo modes like HTC's camera UI. 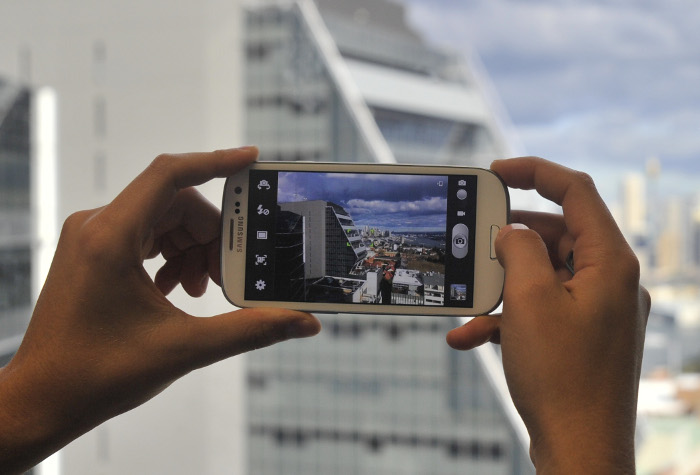 The Galaxy S III also has a 1.9-megapixel front facing camera that shoots 720p video. Though the quality of images and photos from this camera aren't overly impressive, they are a notch above what we are used to seeing from front facing cameras on most other camera phones. The video works particularly well in third party apps like Tango and Skype.

The Samsung Galaxy S III comes with 16GB of internal memory, though a 32GB model is on the way and will be sold through Australian retailers and telcos when available. We don't see the 16GB of internal memory as an issue given the microSD card slot. A more pressing issue is the lack of a 4G-capable model. Samsung has refused to confirm when this will be available, only saying it is in discussions with telcos (read: Telstra) to bring it to market in Australia in the coming months.

The Samsung Galaxy S III has average battery life. For light users, it should last a full day, but heavy users will more than likely need an injection of power before the end of the day. The best we managed to squeeze out of the Galaxy S III was a relatively impressive 18 and a half hours on a day with light to moderate use. However, we found a maximum of 12 hours use the norm during a more taxing day, which is about average. 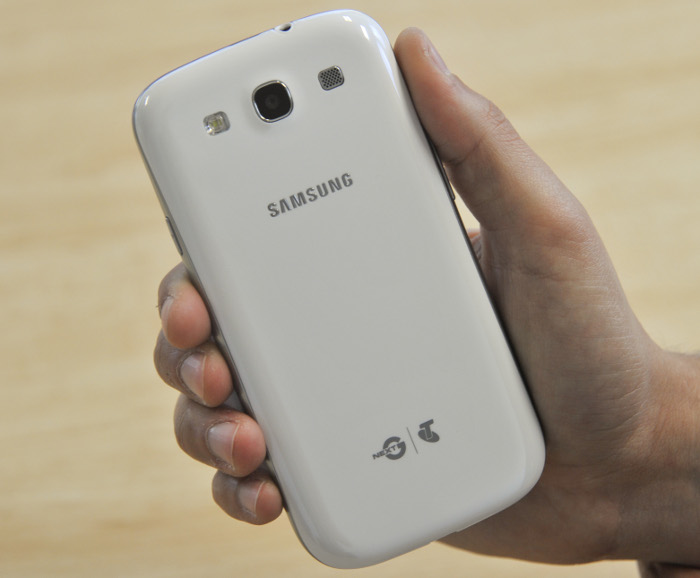 The Samsung Galaxy S III is available now through all major Australian carriers and selected retailers.