The Samsung Galaxy Tab is a nicely sized tablet that offers the flexibility of Google's Android OS, making it a valid alternative to the iPad. However, the Galaxy Tab feels far less slick and polished in many areas than Apple's tablet, especially when it comes to Web browsing. We also feel the Galaxy Tab is overpriced, making it a tough sell in a soon to be crowded market.

The preloaded Navigon GPS application provides full turn-by-turn navigation with voice guidance, and both drive and walk modes. The Navigon app is free to use, though extra features such as lane assistance and safety warnings ($12.95), live traffic ($19.95) and additional voices ($9.95) need be purchased through three separate add-on packs. The larger screen is a real plus for navigation, though you will need to factor in the cost of a car cradle and a car charger if you wish to utilise this feature often.

We were reasonably impressed with Samsung's "Readers Hub". Designed specifically for the Galaxy Tab, the app combines access to newspapers, books and magazines in a single portal. The latest Australian newspapers are available in PDF format, including The Daily Telegraph, The Sydney Morning Herald, and The Australian, with a free subscription trial available for each. Samsung has partnered with Kobo, PressDisplay and Zinio to deliver content, and has more than 2 million books, more than 2500 magazines in 20 languages and more than 1600 newspapers in 47 languages available. Generally, newspapers through the Readers Hub are not as ready friendly as reading a regular paper version, but text can be resized, pages can easily be scrolled through by swiping left and right and text is displayed without any visible aberrations. We preferred this to using The Australian app, which we found much slower to load. 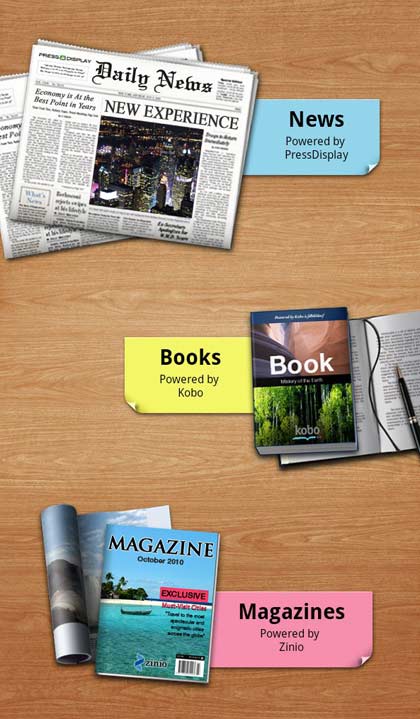 The Samsung Galaxy Tab's Readers Hub provides newspapers, books and magazines from PressDisplay, Kobo, and Zinio, respectively. More than 2 million books, more than 2500 magazines in 20 languages and more than 1600 newspapers in 47 languages are available.

The Samsung Galaxy Tab is excellent for displaying multimedia content. There are a number of third-party media player applications designed for the Android platform to boost the tablet's music and video playback capabilities, and the Galaxy Tab also boasts DivX and Xvid support. We watched a 120 minute AVI file on the device; it played back with no issues. The built-in camera is slightly disappointing: in addition to the tablet being an awkward size to hold for still photos and video recording, the camera produces shots that lack detail and have poor colour reproduction.

Battery life on the Samsung Galaxy Tab is excellent, though not as good as the iPad. With light use, it often lasted up to three days in our tests. If you use it frequently, you may have to charge the Galaxy Tab every night, but if you're using it for light Web browsing over both Wi-Fi and 3G, e-mail and the odd music session, the Galaxy Tab should last up to two days. For extra battery life, Samsung recommends closing any running background apps that you aren't using, turning Wi-Fi and Bluetooth off when not in use and deactivating auto-sync on your Google account (though the last of these defeats the purpose of an always-on data connection).