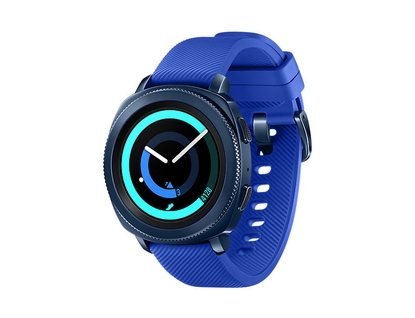 If you want something that isn’t Apple, looks, feels and executes on the conventional smartwatch with more pizzazz than the rest, the Gear Sport is the way to go.

At the start of 2017, smartwatches difference between high-end fitness bands and smartwatches was becoming smaller and smaller. By the year’s end, the gulf between market leader Apple and the rest of the competition only seemed to get wider. Samsung’s latest effort in the space - the Gear Sport - feels like an result borne from - or at least inevitably shaped by - these two trends.

Courtesy of the company’s trademark tendency towards eventually getting it right, the Gear Sport is still undoubtedly Samsung’s best smartwatch yet. However, that appeal of achievement occasionally feels a little muted, given the context. Still, if you’re in the market for a smartwatch that isn’t the Apple Watch, this is definitely a worthy contender.

In the broadest of strokes, the Gear Sport holds up as a snapshot on the state of the smartwatch category as it stands today. When it comes to fitness, it’s one of the best (and most expensive) options out there. Unfortunately, in terms of actual smarts, it fails to close the gap between the Apple and the rest in any real, measurable or  meaningful way. That shortcoming isn't a unique one - Fitbit, Garmin and Huawei have all stumbled here - but it remains conspicuous nevertheless.

The Gear Sport is a smartwatch with a 1.2-inch Super AMOLED display (360x360 pixels) that's both touch-sensitive and coated in Corning’s Gorilla Glass. Adding further to the device’s durability credentials, Samsung also say the watch is MIL-STD-810G compliant and comes with an ATM5  rating against water damage. That said, the Gear Sport lacks the IP68 rating found in 2016’s Gear S3 - making it a step down in durability.

Under the hood, the Gear Sport is powered by a Exynos 3250 dual-core chipset and approximately 768MB of RAM. It runs on Tizen 3.0 and comes packing Wi-Fi, NFC and Bluetooth 4.2 connectivity. It also boasts approximately 4GB of on-board storage and dual-mic noise cancellation to help you get the most out of its on-the-go phone call capabilities.

The dark, shiny design of the Gear Sport doesn’t do it many favors here. Nevertheless, the Gear Sport does pack in one key design feature that does set it apart from the competition: a bezel-based control scheme. Where devices like the Huawei Watch 2 and Fitbit Ionic rely on their touch displays and a handful of buttons for control. The bezel on the Gear Sport can be twisted and spun to easily and quickly navigate through device’s menus. This works like a charm - and the results look smooth as hell on the Gear Sport’s slick Super AMOLED display.

Of course, when it comes to the software-side of things. Samsung’s reliance on the Tizen comes with a few drawbacks. Sure, they’ve got their highly-vaunted partnership with Spotify. However, beyond that, the app library for the Gear Sport is slim pickings.

The usual suspects are here: additional watch faces, presentation controllers and navigation tools like Google Maps. The Gear Sport also supports contactless payments via Samsung Pay - which is neat. Unfortunately,  beyond that, there’s not a whole lot here and few real must-have or particularly innovative use-cases to be found. It does all the things you more-or-less expect but little outside of that.