A Samsung Bluetooth speakerphone designed for in-car use 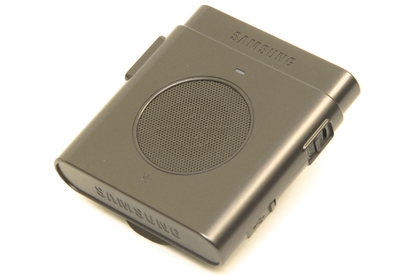 Although it won't win any design awards, Samsung's HKT600 Bluetooth speakerphone remains a credible option for use in the car thanks to its good voice performance and ease of use.

A rather bland-looking in-car Bluetooth speakerphone, Samsung's HKT600 certainly won't win any design awards. However, it will do a capable job of handling mobile phone calls while you're on the road.

In the age of flashy and colourful gadgets, the Samsung HKT600 speakerphone looks dull, with a boxy design and a dark grey colour scheme. Its construction feels solid and the plastic casing is firm and sturdy, suggesting this device is certainly capable of taking a few knocks and bumps.

The HKT600's sunvisor clip can't be detached, unlike the clip on speakerphones such as the Sony Ericsson HCB-105 and the Sudio Vogue. The rigid visor clip suggests this speakerphone has been designed purely for in-car use, but it can still be used in the office. The clip acts as a stand that raises the HKT600 slightly off a desk, though the fact you can't detach it makes the speakerphone annoying to pocket.

Operating the HKT600 is straightforward enough, though Samsung has used a power switch and a volume scroll wheel instead of traditional buttons. A multifunction key handles most of the HKT600's call operations, so using the device requires presses of different lengths. For example, answering an incoming call requires a press, while rejecting an incoming call or making a voice-activated call (provided this is supported on your mobile phone) requires users to press and hold the multifunction key.

Pairing the HKT600 speakerphone to our iPhone 3G was a simple process: simply hold down the multifunction key while turning the unit on and it automatically enters pairing mode. Voice performance was good, though the volume at its highest level lacks a little punch and could have used a boost, especially if there is background noise while driving. Our callers also noted that we tended to sound distant at times, though this can be resolved by flipping the visor down in order to move the microphone closer to your mouth. The HKT600 possesses noise- and echo-reduction features

Samsung claims the HKT600 Bluetooth speakerphone has a talk time of 16 hours and a standby time of one month, so you shouldn't have to charge it too often. Only an in-car charger is included in the sales package; it would be convenient to be able to charge the unit away from the car either via an AC adapter or a USB PC charger. Clipping the HKT600 to the sunvisor while it's charging means the unsightly cable will be left dangling.