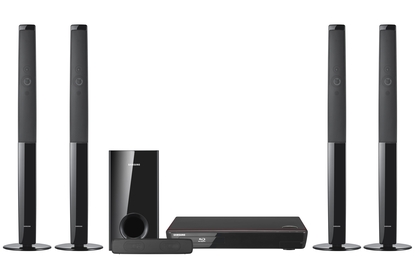 If you’re looking for a simple yet feature-filled system to accompany a new flat-screen television, Samsung’s home theatre in a box does the trick nicely.

The Samsung HT-BD1255 is a 5.1 surround sound home theatre system with an integrated Blu-ray disc player, an iPod dock, network connectivity and wireless rear speakers. It looks great and has well-rounded sound for a (comparatively) cheap system.

The Samsung HT-BD1255 arrives in a single large box, with all the components arranged Tetris-style. The combination Blu-ray player/amplifier is the first to come out. It’s an attractive unit, with a style similar to Samsung’s LED and plasma televisions. It has a slimline form factor, so it will fit into any space designed for a DVD player it.

The Samsung HT-BD1255 wireless rear speakers mean you won’t need to run cables around your living room, but you will want some spare power-points where you want to place them. The bundled subwoofer matches the styling of the speakers, with a piano black finish that looks stylish and modern.

Once you’ve placed all the speakers in appropriate parts of the room, it’s time to make all the connections to the receiver. All the appropriate speaker wire connectors are grouped together, with digital and analog audio inputs accompanying the main HDMI output. It’s quite a simple system to set up, lacking the masses of inputs and outputs of a full-scale AV receiver. The Samsung HT-BD1255 has the same price as the LG HB954WA home theatre system, which has a similar feature set, so it’s odd not to see any HDMI video inputs for connecting external set-top boxes.

The inclusion of a Blu-ray player means you don’t have to purchase an additional unit like the Samsung BD-P1600. When playing Blu-ray test material the picture quality was as good as any other players we’ve seen, with the Full HD 1080p output full of accurate colour and fine image detail. DVD sources were well up-scaled, but we did notice an incidence of DVD audio lagging behind the video. This was rectified by pausing and re-playing, and we didn’t notice it again, so it’s not a huge concern.

Sound quality is good for a pre-built ‘home theatre in a box’ system. The four tower speakers are crisp and deliver impressively defined treble and mid-range to very high volume levels, while the slimline centre speaker represents dialogue faithfully. The subwoofer is responsible for all lower-frequency sounds and while it often fills in mid-range sounds well for the thin floor-standing speakers, there’s a puzzling lack of lower bass. Overall, sound is well-rounded with no huge frequency gaps, but a little more thump from the subwoofer would have been appreciated.

We played a variety of music on DVD as well as via the integrated iPod dock, which accepted our Apple iPod touch 2G without any drama. Controlling the iPod was easy after a little instruction — the on-screen menu system is similar to that of a click-wheel iPod Classic or Nano. Network streaming of shared music from a PC is also possible if you have a large digital music collection.

Samsung’s HT-BD1255 Blu-ray home theatre is a capable system with no crippling flaws. The LG HB954WA offers slightly better value, but this is still a stylish and powerful pre-built home theatre.