The Samsung HT-BD2E is an 800 Watt home theatre system with a built-in Blu-ray disc player, good sound quality and plenty of power. 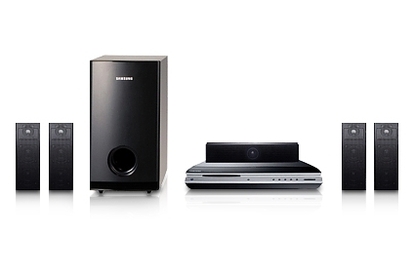 This basic home theatre package packs a 5.1 channel amplifier into a Blu-ray player. Simply plug in a flat screen television and you’re ready to go.

The Samsung HT-BD2E is a powerful home theatre system with a built-in Blu-ray disc player. It doesn’t offer all the features of the Panasonic SC-BT105 (which has an integrated iPod dock) or the LG HT903WA (with its wireless rear speakers), but whatever the Samsung HT-BD2E does, it does well.

The Samsung HT-BD2E is quite a stylish home theatre system, with metal speaker grills and a very solid feel. Despite being only satellite-sized, the speakers are heavy and feel well built — a pleasant surprise given the cheap feel of some systems. The combination amplifier/Blu-ray disc player is quite large; its prominent lip makes it seem like a mutant, over-sized laptop.

The Blu-ray disc playing component of the Samsung HT-BD2E system is only compatible with Profile 1.0, which means it won’t be able to access any of the Profile 1.1 or 2.0 features of retail Blu-ray discs — no online interactive content can be accessed. We’ve made our thoughts clear on BD-Live and interactive functionality before so we won’t digress here. If you really, really want BD-Live, this system isn’t for you. If you don’t care, read on.

Connectivity for external audio is acceptable. There are two optical digital audio ports — so you can connect your television for 5.1 surround sound on high-definition digital channels — and a small range of analog inputs (you could use these for connecting a VCR, for example, or even attach an MP3 player with the correct adapter).

Video quality from the Samsung HT-BD2E home theatre system’s HDMI output is crystal clear. We tested it on a Sony KDL55XBR45 and found the image quality no different to any of the other Blu-ray disc players we have recently tested — such as the LG BD300, Panasonic DMP-BD35 and Sony BDP-S350. There’s no USB connectivity for playing videos off an external flash drive — you’re stuck with playing DVDs or Blu-ray discs.

The sound that the Samsung HT-BD2E produces is impressive for a system of its size and price. Playing the Pearl Harbour Blu-ray disc, we were pleased with the balanced and immersive nature of the audio. Bass from the subwoofer was strong and loud, if not very deep, while mid-range and treble were acceptable. The system is powerful, too — a reasonable listening volume is easily attained and there’s no distortion until painfully loud volumes.

It’s easy to set up as well, if you don’t mind running cables to each individual speaker. There’s no wireless rear speaker option, but if you’re adept at hiding cables this won’t present a problem. Plenty of cable is included with the package.

For the price, the Samsung HT-BD2E is a good buy. It has a Blu-ray player, powerful speakers and the ability to connect a few external audio devices.