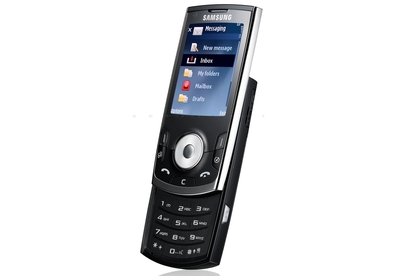 The i560 is a capable but not outstanding mobile phone. The lack of Wi-Fi may be a deal breaker for some, but the included GPS software and accessories are welcome additions.

The second Samsung phone launched in Australia running a Symbian operating system, the HSDPA-capable i560 offers a sleek and stylish design with the added feature of in-car navigation. A built-in GPS receiver and Route 66 mapping software, along with a bundled handset cradle, holder and in-car charger, make this a worthy option for the road.

Samsung may have moved to a Symbian OS, but on the outside, the latest handsets are similar to their predecessors. The i560 is a slider handset and it looks and feels classy — in particular the spring-operated slider feels sturdy and well built, even if its operation isn't as smooth as expected. The gloss black finish on the front of the unit handles fingerprints quite well; this is also the case for the matte black finish on the back. The biggest issue is the rear battery cover: it's almost impossible to remove. It requires a ridiculous amount of force to budge.

The change in OS hasn't hindered the operation and use of the i560 — a comfortable five-way navigational pad in addition to answer and end call keys, two selection buttons and dedicated menu and music keys make this handset a breeze to use. Although the keypad is almost completely flat, each key is large and well separated.

The navigational software is almost identical to the Nokia 6110 Navigator and the i560's GPS functions are completely free out of the box. There are no data charges for turn-by-turn navigation, and an entire map of Australia is included in the sales package.

The i560 uses the Route 66 application with NAVTEQ maps. If you're used to standard in-car GPS units, then there will be somewhat of a steep learning curve, as there is no touch screen. Most operations centre on the two selection buttons and the five-way navigational pad; this can get frustrating due to the small display.

The GPS experience is almost the same as using a dedicated in-car unit, minus the large touch screen but with the added portability factor. Do note that the i560 does take a little longer to lock onto a GPS signal — sometimes up to three or four minutes. Once connected, we were consistently able to get a signal, even indoors. Voice guidance is excellent, with the volume more than loud enough at its highest setting, which allows you to keep your eyes on the road.

Unfortunately, the size of the screen means there is little room for the navigation bar, which has a speed indicator, the time and distance to reach your destination and current GPS signal strength. An excellent feature of the maps is the automatic zoom, which hones in every time you make a turn to give you the clearest possible route.

The navigational interface is almost identical to a standard Series 60 handset, with all menu options clearly labelled for ease of use. Our only complaint is typing; when searching for an address or point of interest (POI), you can't type using predictive text input.

GPS navigation aside, the i560 is capable of HSDPA data speeds of up to 3.6Mbps. Call quality is above average and the volume is loud enough at its highest setting. In terms of connectivity, the i560 includes Bluetooth 2.0 and USB 2.0 but Wi-Fi is a notable omission.

As it runs the popular Symbian S60 OS, the handset is equipped with a full array of smart phone applications, including QuickOffice document viewers, a host of PIM features (calendar, notes, voice recorder, calculator, clock, converter) and a flash player. It's also fully compatible with PDF files and has support for standard SMS and MMS messaging along with email — all featuring T9 predictive text input.

The i560 is a capable, but not outstanding multimedia device. Best of all, it has a standard 3.5mm headphone jack, though you'll still need the included proprietary headphones to use the FM radio. There is 150MB of internal memory, and a 1GB microSD card is included and contains the Route 66 application and maps.

A 3-megapixel camera with a flash rounds out the package, though the lack of autofocus is a downside. Being 3G, the i560 also has a front-mounted VGA camera just above the display.