Samsung's N150 netbook is good for creating basic office documents, browsing the Web and watching standard definition video. We like its keyboard and think it's a comfortable netbook to use overall. However, its battery life could be a little better and we wish the preinstalled software wasn't so intrusive.

The Samsung N150 is a 10in netbook with a thin profile and it weighs only 1.25kg. It runs Windows 7 Starter edition and it’s perfect for Web browsing, word processing and even for watching standard definition videos. However, it’s a netbook that also delivers a frustrating user experience from the start, and in our opinion there is too much pre-loaded software that display annoying pop-ups that require user intervention in order to stop them appearing.

The reminders and notifications from McAfee Antivirus, Samsung Update Plus, Samsung Recovery, and Samsung FailSafe software pop up while you’re trying to access a Web page to load or when you’re in the middle of writing a Word document. You have to either activate the McAfee Antivirus software or uninstall it. Samsung FailSafe software can be used to track and possibly retrieve the netbook if it’s ever lost or stolen, but it’s a 30-day trial so you can either activate it or click ‘no thanks’ to stop the reminders from popping up. Samsung Update Plus can be configured to check and install updates automatically, or you can tell it to never check for updates. Funnily enough Samsung Update Plus tells you that you might be required to update it before it can be used to update your system. We think you’re better off just using the Windows Update. 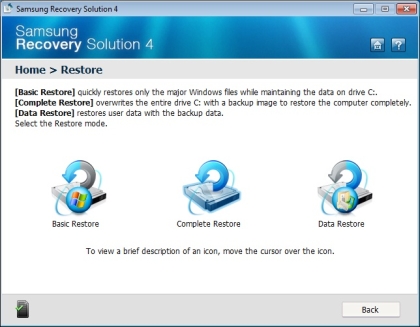 Samsung Recovery is the most useful of the nagging software, as it allows you to easily backup or restore your system.

Additionally, the pre-installed software can slow down the system’s performance, which can become frustrating. As it only has a 1.66GHz Intel Atom N450 CPU and 1GB of DDR2 SDRAM, multitasking isn’t one of the netbook’s strong points; it performs at its best when performing only one task. In our performance tests, the N150’s results were solid. It recorded a time of 6min 52sec in the Blender 3D rendering test, which is a faster time than the HP Mini 5102 and Lenovo IdeaPad S10-3t, but it’s not as fast as the Toshiba NB300. Its time of 8min 03sec in the iTunes MP3 encoding test is just about average for a netbook.

The graphics performance of the N150 is dependant upon the integrated graphics controller in the Intel Atom N450 CPU and it’s not fast. You won’t be able to play anything but the simplest of games on the Samsung N150 (games that don’t use complex graphics for example), and even Flash-based games may run sluggishly on it. Either way, the 1024x600 resolution of the screen isn’t high enough to display most games anyway. There is a Samsung utility called Easy Resolution that can be used to bump up the resolution to 1024x768 (you can do the same thing from the Intel Display Driver properties), but it makes the screen look squished. Standard definition Xvid-encoded videos will play smoothly, but anything higher than standard definition will put too much stress on the system.

While the performance of the Samsung N150 is typical for a netbook, its design aspires to be a little more than run-of-the-mill. For the most part, the design is well executed, but it still looks a little tacky in places. In particular, the screen could look better. It has a matte finish, which we love as it means lights won’t be reflected off it, but at the same time there is a glossy strip that frames the screen and becomes distracting when the light reflects off it. Another quibble relates to the unnecessary label that reads ‘Digital Livecam’ next to the webcam.

The N150 has a thin profile that looks good and it balances well on your lap. When you use it for a long period of time on your lap, it won’t get overly warm and become uncomfortable. It has an extraction fan on the left side, and this does well to keep the chassis cool. The build quality feels solid overall and the screen rests on reasonably stiff hinges.

The battery has a 48 Watt-hour rating and it’s big enough to give the netbook a slight forward slant when it’s resting flat on a table. It lasted 3hr 54min in our rundown test, in which we disable power management, enable Wi-Fi, maximise brightness and loop an Xvid-encoded video. We expected at least four hours battery life (the Samsung NC10 , recorded just over four hours in our tests back in September 2009), so this result from the N150 was a little disappointing.

The keyboard is cramped, which is expected on a netbook, but it has a good layout with no keys missing. Only the arrow, function and page keys are undersized; the shift keys and the space bar are big enough so that you can type comfortably. The main keys are 11mm wide and there is a gap of 2mm between them. They have rounded at the edges, so they look and feel a little different to a typical netbook keyboard. They offer good resistance and the keyboard doesn’t bounce when you type.

Along the edges of the Samsung N150 you get three USB 2.0 ports, a VGA port, microphone and headphone ports, 10/100 Ethernet and an SD card slot. That’s all standard fare for a netbook. However, one of the USB ports is of the ChargeableUSB type, which means that you can charge USB-based devices such as phones and MP3 players while the netbook is not even switched on. It’s not as good as Toshiba’s Sleep-and-charge USB ports, which can also recharge an iPhone, but it’s perfect for when you’re on-the-go and need to top-up any other types of USB-based devices — in our tests it worked well with our Creative Zen. ChargeableUSB can either be enabled from the Windows-based application or from the BIOS.

You also get a webcam, Bluetooth and 802.11n Wi-Fi. We don’t like the location of the SD card slot on the front of the chassis; it can get in the way when you use the netbook on your lap, as the card sticks half-way out of the slot. Plus it’s not a spring-loaded slot.

For $499, the Samsung N150 is a lightweight netbook that’s well-built, with a comfortable keyboard and matte screen. Samsung should cut back on the pre-installed software and improve the battery life, but you can always uninstall the supplied software and also implement stringent power schemes to get more life from the netbook when you’re on the road.