Compared to the rapidly spinning and fragile platters of your normal hard disk drive, the future of storage would seem to be solid-state memory 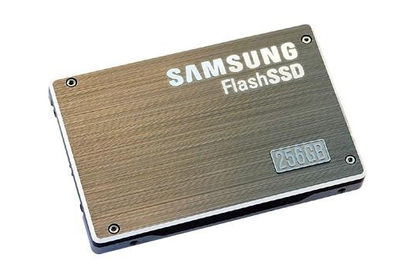 Our synthetic performance figures from the Samsung PB22-J 256GB SSD speak for themselves — this storage unit exceeds the capability of the best 2.5in HDDs, and all but the best 3.5in hard disks.

The future is static. Compared to the rapidly spinning and fragile platters of your normal hard disk drive, the future of storage would seem to be solid-state memory. Static, unmoving, solid-state drives (SSD) don't suffer from the perils of being moved around while in use — suiting laptops and portable devices perfectly — as well as offering many other advantages. The list of potential benefits include low (zero) noise, lower power consumption and heat output, and very quick read speeds.

Write speeds are another matter, though, especially with the newer high-capacity generation of technology featuring multi-layer cells (MLC), used to raise formerly small capacities and lower impossibly out-of-reach price tags. But price is still an issue, so if you're intent on acquiring a quarter terabyte of solid-state storage for less than the price of a, say, a complete 15in laptop — best look away now.

Samsung is a world leader in semiconductors, and that includes the type of silicon used in RAM and NAND Flash memory. Its new Samsung PB22-J 256GB SSD promises very high performance, and in our straightforward tests at least, certainly delivered.

We were keen to throw the full gamut of multi-platform tests at this 2.5in notebook drive, but the message we received from Samsung at the outset was clear: that this drive should only be tested on a Microsoft Windows operating system (OS).

So we ran the drive through the HD Tach benchmark, using Windows Vista Home Premium SP1, with the Samsung PB22-J 256GB SSD connected directly to the internal SATA bus of a Dell Studio XPS 13 notebook. Boot volume was the notebook's original storage (itself a 128GB Samsung SSD) connected via eSATA.

Using this connection, the maximum burst rate, which gives an idea of the ceiling on throughput imposed by the bottleneck of the data bus, was 233MB/s. We recorded average read speeds of 173.5MB/s, using HD Tach's ‘Quick' test of 8MB zones. This rose slightly to 176.0MB/s using the ‘Long' 32MB test.

Write speeds of the Samsung PB22-J 256GB SSD, traditionally the Achilles' Heel of MLC SSD technology, were lower but still far ahead of what you'd find from the best 2.5in HDDs currently on the market: we measured 106.9MB/s with 8MB zones. This fell to 97.7MB/s when writing in the longer test, but is still an impressive figure relative to hard disk technology.

Almost as impressive, latency scores were breathtakingly low. Where most hard disks will take around 10-20ms to find any randomly chosen sector on the platter, this Samsung PB22-J 256GB SSD could find its data in 0.2ms. At up to two orders of magnitude faster, this should translate into real perceptible snappiness in daily PC tasks.

Our synthetic performance figures from the Samsung PB22-J 256GB SSD speak for themselves — this storage unit exceeds the capability of the best 2.5in HDDs, and all but the best 3.5in hard disks. How such an SSD performs in the real world, we hope to discover in a follow up feature, where we will test with real operations on Windows and Mac operating systems. With its minimal heat output, silent and shockproof operation, then — subject to our findings from real-world usage — the main hindrance to an unequivocal recommendation of this Samsung SSD would be the high price, at around eight times that of tried-and-tested hard disks. But competition among other vendors such as Intel and OCZ should see retail prices become more attractive before too long.