Store your data in style, and access it really quickly 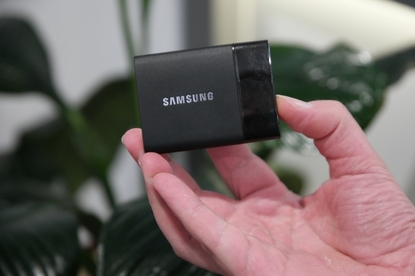 Highly mobile external storage devices with great capacities are usually in the form of 2.5in hard drives. They are chunky, usually ugly, and mostly slow. Samsung’s Portable SSD T1 aims to change all that. It’s a solid state drive that’s available in capacities similar to traditional portable drives, but it’s the antithesis of the portable storage you are perhaps used to, instead offering very fast performance, as well as a dash of style.

In confines that are less than 9mm thick, and which cover an area that’s smaller than a credit card, Samsung has installed three-dimensional memory technology of the sort that can be found in its internal range of SSDs. That should automatically tell you a little about the type of drive Samsung is going for: a fast one!

Armed with this fast memory, and with a USB 3.0 interface on its end, the Portable SSD T1 is the perfect match for any computer that also uses solid state storage. Files can gallop at a pace rarely seen between a computer and portable storage, and this means productivity can be boosted, whether you need to copy large project files for a client, or even if you just want to copy a bunch of movies as fast as you can before you leave to catch a flight.

It’s the type of drive that you need to consider if you’ve always been hampered by slow transfer speeds to external storage devices, but there are also other benefits. Being a solid state drive means that there are no moving parts inside the drive that can get damaged from everyday travel. It’s a drive that also runs silently, and its size is much smaller than a hard drive offering a similar capacity, meaning it’s easy to carry in any scenario -- even if you haven’t got a bag to hand.

You can find the T1 in 250GB, 500GB, and 1TB capacities (we’re reviewing the 500GB version, which has a 465GB formatted capacity), but the prices are high compared to mainstream hard drive storage: $269 for 250GB, $429 for 500GB, and $799 for 1TB. That pricing means you really should consider your needs greatly before buying, but as we’ve already mentioned, if your number one consideration for portable external storage is speed, then the T1 is a no-brainer.

We tested it on a high-end Asus RoG gaming laptop with an SSD installed in its belly, and we plugged in the T1 via USB 3.0. The T1 made full use of the USB 3.0 interface, especially when we transferred lots of large files (mostly AVI- and MP4-format movie files).

These files were read by the T1 at a rate of 375.42 megabytes per second (MBps), with the speed reaching a peak of 359MBps. It was then able to write the same large files at a rate of 315MBps. To give you an idea of the sizes and times involved, we copied 44.3GB to our laptop in just under 2min. Most portable, external hard drives tend to top out at about 103MBps when reading large files, so you can see that the T1 is almost four times as fast in that scenario.

For music files, which included a couple of thousand MP3s and FLACs, the T1 produced a read rate of 309MBps and a write rate of 183.78MBps. In this scenario it moved 13.6GB of music to our laptop in 44sec, and took 1min 14sec to write it from the laptop. Again, the speed here is impressive.

There isn’t such a dramatic speed difference compared to a hard drive when copying these much smaller files. An external 1TB Seagate drive read them at 76.64MBps and wrote them 76MBps. The overall time saving of the T1 was a mere few seconds in this scenario, but it was nevertheless a saving.

So we’ve established that the T1 is fast -- especially for large movie and music files – but the thing that also shouldn’t be lost in the mix is how convenient it can be for everyday usage, including as a drive for transferring data off phones and tablets.

For devices that support USB OTG (On-the-Go), you can simply buy an OTG cable and connect it to your phone or tablet to either transfer data off your phone to the SSD, or to stream videos and music off it. It can come in especially handy when travelling, and because the capacity is so large, you don’t really have to be too selective in the content that you take with you; you can just transfer a whole bunch of content, take it with you, and select on the way what you want to watch or listen to. Of course, the battery in your device will drain a little quicker in such a usage scenario, and holding the drive while its connected to the phone could be cumbersome.

We actually think it’s a great candidate for use with mobile devices because of its size, capacity, and the fact that you can simply store it in your pocket. Samsung doesn’t supply an OTG cable in the box, though, and that’s because Samsung is primarily pitching this drive at performance seekers. We say: why not both?

Overall, though, this is a drive that is first and foremost for those of you who want the ability to transfer large files to and from a portable storage device with plenty of speed. But you’ll also need to have a fast computer in order to reap all the benefits of this speed, and that just means a computer with a USB 3.0 port and a solid state drive rather than a hard drive.

We like it and want to see more of this type of drive on the market: no moving parts, small and easily mobile, stylish, no separate power connection, stacks of speed, and high capacity. If security is your concern, then you can use a password to apply AES 256-bit encryption to the drive. The file format is exFAT and it will work on both Windows and Mac computers.