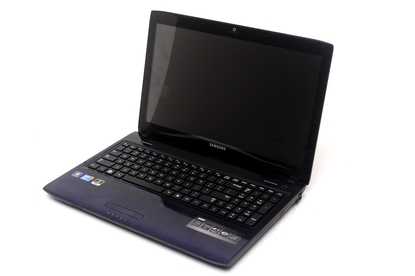 Samsung's R590 is an attractive and solidly built 15.6in notebook. It's too cumbersome to be carried around every day, but it does make for a great desktop PC replacement. You can use it for everyday office work, as well as tougher tasks such as video encoding and gaming.

The Samsung R590-JS02AU looks good, feels sturdy and performs well. It's a 15.6in desktop replacement–style notebook with a fast Intel Core i5 CPU and plenty of memory and storage capacity. However, it's practically the same as the Samsung R580 notebook that we reviewed back in February — the main difference is that it's blue instead of red. The physical design and the performance of the notebooks are almost identical.

We absolutely love the build quality of the Samsung R590-JS02AU: its base and lid feel rock solid, it's keyboard doesn't bounce when you hit the keys and the screen's 'edge-to-edge glass' (it's actually plastic) helps keep the gap between the screen and bezel free of dust and other debris without adding much to the overall weight. The R590 weighs 2.6kg, which is 100g more than the R580.

The screen's hinges could stand to be a little stiffer, as the display sometimes falls back if you make a sudden movement while using the notebook on your lap. The component design and layout could also be a little better. For example, the air vent is located under the chassis rather than on the side, which means the notebook will heat up your thighs and get uncomfortable after approximately 30min of continuous use.

The palm rest is almost 100mm deep. Its smooth, glossy finish means that sometimes it can feel either slippery or sticky, depending on the weather and how long you've been typing. We would prefer a textured finish that allows palms to breathe a little. The 43x75mm touchpad almost blends in with the palm rest, but it does have a slightly different texture. It supports multitouch and gestures, and its sensitivity was good during our tests. We hate its left- and right-click buttons, which share a single piece of plastic in a bid to blend in with the palm rest. They feel horrible to press and sometimes a single click will make two clicking noises, which just sounds ghastly. When using the touchpad in the dark, four tiny LEDs will illuminate at the corners of the touchpad to let you know where it is. Just like the R580, the R590 lacks a backlit keyboard.

The inside the R590-JS02AU is a 2.4GHz Intel Core i5-450M CPU, which has two cores and Hyper-Threading, and it's accompanied by 4GB of DDR3 SDRAM, a 640GB, 5400rpm hard drive, and a 1GB NVIDIA GeForce GT330M graphics adapter. It recorded times of 56sec and 1min 1sec in our Blender 3D rendering and iTunes MP3 encoding tests, respectively, and it took 1hr 6min to encode a DVD file to a 1.5GB Xvid file using AutoGordianKnot. These are all solid results, yet not faster than the R580, which has a Core i5-520M CPU with a faster Turbo Boost frequency and therefore performed better in some tests.

The hard drive performance of the R590 was also a little down on the R580 — 25.85 megabytes per second compared to 26.83MBps. In 3Dmark06, the notebook's NVIDIA GeForce GT330M recorded a score of 7409, which means that you can run games on it, although you'll have to sacrifice some eye-candy when running the latest 3D shooters.

A 48 Watt-hour battery is supplied with the R590, and it gives the notebook decent but not spectacular life away from a power outlet. In our battery rundown test, in which disable power management, enable Wi-Fi, maximise the screen's brightness and loop an Xvid-encoded video, the battery lasted 1hr 44min. This is an improvement of nine minutes over the R580, but it's still shorter than most 15.6in laptops we've seen. For example the MSI FX600 lasted 1hr 59min when using its NVIDIA graphics adapter.

Just like with the R580, if you use Samsung's custom battery profile, you will be able to get over two hours out of it. Depending on how you use the laptop, you might even get a lot more. You can quickly see how much battery life is left by pressing the indicator button on the battery itself, and this saves you from having to boot up the notebook in order to check on its power status.

You probably won't want to use the R590 away from home or the office much: it is rather thick and cumbersome to travel with, despite being relatively light. The glossy screen is prone to reflecting lights, but it is bright enough to be used outdoors as long as it's not in direct sunlight — you could use it on a balcony without any problems. As mentioned earlier, it also gets quite warm if you use it on your lap due to the air vent being blocked, so the best scenario for the R590 is as a desktop PC replacement. It has a built-in DVD burner, four USB 2.0 ports, eSATA, HDMI, VGA, microphone and headphone ports. It also has an ExpressCard/34 slot, an SD card slot, 802.11n Wi-Fi, Gigabit Ethernet, Bluetooth and a webcam.