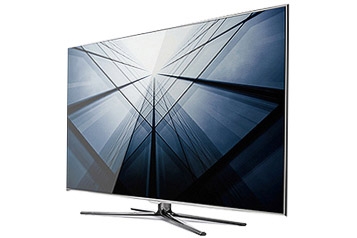 We're very keen to take a look at Samsung's newest Series 8 LED television when it hits Australian shores. With styling that's a mix of 2010's Series 7 and Series 9 LED sets, it has LED edge-lighting hidden behind its super-thin bezels as well as 3D processing that automatically detects the content type.

At CES 2011, Samsung threw the covers off over 40 new LCD, LED and plasma TVs. The Samsung Series 8 LED TV is the flagship model in the new line-up, and it's definitely impressive. It's got a bezel that's barely 5mm thick, with a glossy chrome finish and the same four-legged stand we saw on the 2010 Samsung Series 7 LED TV.

All the usual high-end bells and whistles are built in — it has a 200Hz refresh rate, 3D processing with 3D glasses that connect via Bluetooth, and a touchscreen remote control. If you're lazy, you can even use an iPhone or Android phone to control the television. Built-in Wi-Fi means the Samsung Series 8 LED TV can connect to your wireless network and access Samsung's Smart Hub service, which includes a Web browser, movies, downloadable applications and a search function.

We don't have any details about Australian launch dates and pricing for the Samsung Series 8 LED TV, but we're looking forward to putting one through its paces in our Test Centre.