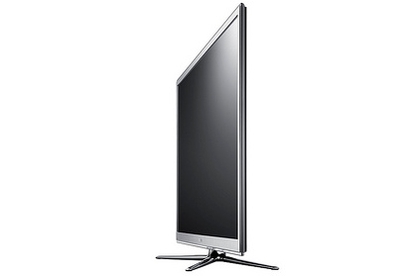 Samsung's Series 8 3D plasma TV looks to be a near-identical design to the Series 8 3D LED TV, with a thin chrome bezel and a four-legged stand. If past experience proves true, it should have equal or superior picture quality and a lower price tag.

Samsung's Series 8 plasma TV was announced at CES 2011, along with the Samsung Series 8 LED TV and Samsung Series 7 LED TV. It's got all the fancy features of its LED counterparts, but we're putting money on it having better picture quality at a comparable price point.

Have a look at what we thought were the best TVs of 2010.

Just like the Samsung Series 8 LED TV, the Series 8 plasma has a chrome bezel that's around 5mm thick. Samsung is separating its plasmas from LED TVs by offering different screen sizes — instead of 2010's 42in, 50in, 58in and 63in panels the televisions will be available in 43in, 51in, 59in and 64in sizes. Samsung says the thinner bezel means this increase in screen size will not make the televisions any larger than last year's models.

Samsung's new Smart Hub — incorporating the Search All service that finds content on USB drives, networked PCs and mobile devices, the Samsung Apps application download service, the Your Video movie recommendation feature, and an inbuilt Web browser — is the Series 8's main drawcard, along with a colour touchscreen remote control like the one we saw on the $10000 Samsung Series 9 LED TV.

When we compared the Samsung Series 7 (PS50C7000) 3D plasma TV to the Samsung Series 7 (UA55C7000) 3D LED TV, we thought the plasma had slightly better contrast and a nicer picture overall. Since the same-sized LED TV was $300 more, buying the plasma was a smarter choice. We're guessing that the 2011 models will tell the same story — but we're keen to get our hands on one to reach final a conclusion.