This 27in monitor is detailed, has wide viewing angles and a great anti-glare coating 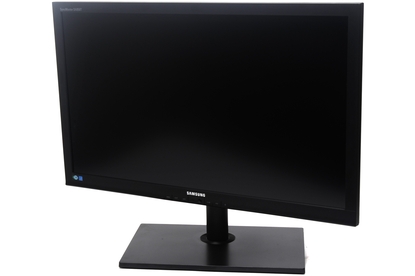 Samsung’s top business monitor is expensive, but it has excellent image quality in almost all aspects. It’s also generally well made and has a wide range of connectors.

The panel is capable of reproducing 16.7 million colours with true 8-bit depth. This, in combination with white LED backlighting, means the screen is able to display the full sRGB colour space. This is a good indication of the high quality of the Samsung Series 8 (S27A850T)’s screen: it is reasonably accurate in its default mode, but calibrating it correctly drastically improves the contrast and accuracy of colours. We set static brightness to 15, contrast to 75 and sharpness to 20, as well as lowering red, green and blue channel values by 6, 3 and 4 respectively.

The Samsung Series 8 (S27A850T) has a dynamic contrast mode that raises or lowers the backlight to suit what’s shown on screen. While this isn’t particularly useful for office tasks like Web browsing or Word, it does do a decent job during movie-watching. The backlight brightness transitions are quick and smooth and are largely unnoticeable, except when quickly changing from a fully black to fully white screen.

A suite of MagicBright and MagicColor image presets — Standard, Game, Cinema, Custom and the aforementioned Dynamic Contrast — alter the screen settings to suit various tastes. We preferred the Custom setting and our calibrated settings for overall colour fidelity and contrast, but less discerning users have other options available.

The scaling engine in the Series 8 (S27A850T) does a good job of interpolating lower resolution content. 1080p Full HD Blu-ray movies — the highest quality video most users have access to — look excellent and clarity is generally very good. Detail levels are on par with a similar 27in screen with a native 1080p resolution (we compared an older Samsung SyncMaster 275T). We also tested PC input at 1080p and found that while text was slightly blurred, images looked good. Enabling the Dynamic Contrast or MagicColor modes drastically increases text clarity in upscaled resolutions.

The anti-glare, semi-glossy finish of the Series 8’s screen is excellent. It’s not a matte finish — there’s a small amount of reflectivity — but the Series 8 does a very good job of cutting out glare from direct and indirect lighting. The coating doesn’t visibly degrade image quality, though; there’s no graininess and no ‘dirty’ effect on white backgrounds, so we think it’s great. 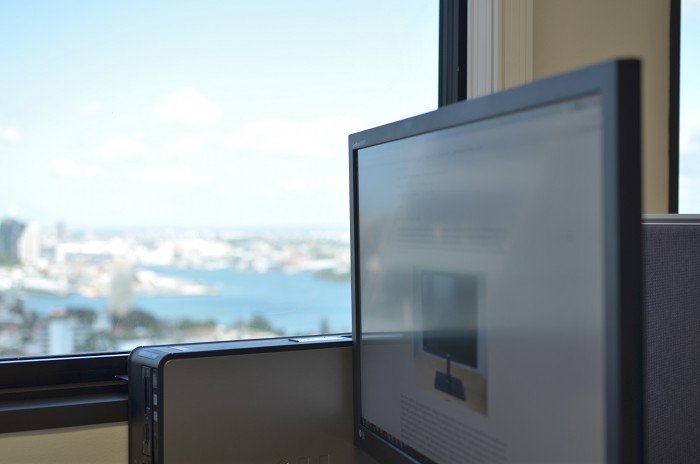 With the screen of the Series 8 tilted towards bright daylight, the monitor’s anti-glare coating cuts out almost all reflections.

The viewing angles of the Series 8 monitor are excellent. Samsung quotes 89 degree viewing angles for every horizontal and vertical axis, but we’re not so enthusiastic. We’d say that near-perfect brightness, contrast and clarity is maintained for around 80 degrees off each horizontal axis, and 75 degrees for each vertical axis. Even after those points, there is only a slight drop-off in brightness until the screen’s bezel cuts off vision. We found (minor) reflections off the screen to be more of an impediment at extreme viewing angles than the loss of brightness. This is a very impressive result.

The on-screen menu of the Samsung Series 8 (S27A850T) has an Eco option, incorporating a motion sensor (which can dim or turn off the backlight after a predetermined time if there’s no motion in front of the screen), and a light sensor to dynamically alter the screen’s brightness based on ambient light levels. We tested both of these features and found that they worked very well — the light sensor was especially useful, altering screen brightness over a wide range.

The Samsung Series 8 (S27A850T) has excellent image quality. We’re very impressed by the detail and image performance of the new PLS panel, the screen’s ecology features and the design of the anti-glare finish.

Apart from the high price tag and sometimes-wobbly stand, we’re very happy with the performance of the Samsung Series 8 (S27A850T). If you’re a power user or design professional, we’d strongly recommend this monitor.