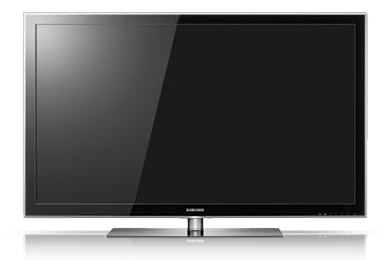 Samsung's 46in Series 8 (UA46B8000) LED TV is the most 'complete' television we've seen so far: it offers Internet and network connectivity, multimedia playback features and LED backlighting. It didn't perform perfectly in some dark scenes of our The Dark Knight Blu-ray test footage, but it's still one of the best televisions we have seen.

The Samsung Series 8 LED television has a similar design to the Samsung Series 8 plasma (PS50B850). At around an inch thick, it's the slimmest television with a digital tuner built in. The thin bezel has a dark mirror finish, while the stand has a transparent cylindrical neck extending from the brushed aluminium base. The screen itself has a reflective coating, but it's not distracting.

It's a very stylish package, but we can't help but feel that it'll require regular cleaning to remove fingerprints. This is especially true given the touch-sensitive buttons on the lower bezel that offer access to volume, channel, source and menu features. For access to more advanced features, the TV comes with a large remote control that is chock-full of buttons as well as a central iPod-style scroll wheel.

Like most high-end televisions, the Samsung Series 8 (UA46B8000) has all the inputs you'll need to connect plenty of digital video devices. Four HDMI ports are side mounted along with two host USB ports (one is powered, for connecting a USB hard drive); the downward-facing connectors are analog, with a VGA port the most likely to be used. If you've got older devices using composite or component connectors, you'll need to use the included break-out cables: the television itself uses 3.5mm jacks to conserve space. This may prove a problem when wall-mounting the television, as the break-out cables end just at the base of the television — you'll either have a problem connecting your devices or the connectors will hit the wall.

The Samsung Series 8 (UA46B8000) has its LEDs situated in the edges of the screen aimed inwards, as opposed to the consistent back-lighting LED sheet of models like the older Samsung Series 9. This means the spread of light is visible around the television's edges when the screen is dark — showing up as blooming 'clouds' of light on an otherwise black background. There aren't many instances in which you'd see this problem, but it's still something we picked up on in our run-through of The Dark Knight on Blu-ray.

Otherwise, the picture quality of the Samsung Series 8 (UA46B8000) is fantastic. A wide, rich colour gamut and plenty of image adjustability means that all the content we watched, including low-quality compressed video and standard-definition television broadcasts, was vibrant and full of colour. After a little adjustment to the saturation of reds we were very pleased with the accuracy of colour.

Motion handling is also a strong point of the Series 8 (UA46B8000). Samsung's 200Hz Motion Plus system uses a combination of frame doubling and LED back-light scanning to smooth out video content. It's an effective system that's perhaps too smooth on its Smooth setting, but there are several other options like Clear that we found enhanced video content. Like the cheaper Series 7 (UA46B7100), this television has a great on-board content library as well as DLNA network streaming (with an optional wireless adapter) of multimedia files and USB playback. If you don't have a dedicated home theatre PC or set-top box, the Samsung Series 8 (UA46B8000) is one of the best TVs for media file playback.

The Samsung Series 8 (UA46B8000) LED television delivers good picture quality and has plenty of connectivity options and a bundled on-board content library. Despite its occasional backlight problems we're happy to recommend it.