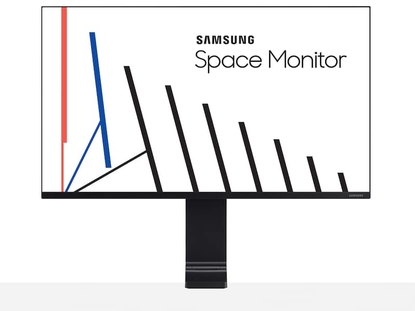 Samsung have gone back to the drawing board and returned with something different, exciting and genuinely useful.

There aren’t many monitors that catch my eye nowadays but Samsung’s new Space Monitor range is the exception to the rule.

It’s a solution to something you might not immediately see as a problem. Unless you’re wall-mounting, the monitor on your desk probably comes with its own stand.  That stand takes up space. Even if it’s a given part of the desktop monitor experience, that occupancy restricts the amount of usable space on your desk.

Your monitor often indirectly dictates where everything else on your desk goes and it’s this pain-point that Samsung’s Space Monitor tries to alleviate. And regardless of whether you’re a fervent minimalist or just looking to gain that little bit of extra desk space, the Space Monitor fast distinguishes itself as a genuinely a really nifty addition to the existing ecosystem of PC monitor options.

As you’d expect from pretty much any modern piece of tech with the Samsung brand plastered on it, the Space Monitor is a pretty showpiece. The 27-inch model I reviewed was lighter than I expected and rocked a winning combination of ultra-slim bezels, WQHD resolution and a 144Hz refresh rate.

Of course, the biggest design pillar worth touching on here is the stand design. Designed around a vice-grip clamp, the Space Monitor latches onto the edge of your desk for support and can be easily titled or pulled forward as needed.

In terms of resolution, the 27-inch Samsung Space Monitor is a WQHD display. The larger 32-inch sized model swaps this out for true 4K UHD. If you’re looking to do some serious graphic design work or content creation, you’ll probably want to opt for the latter. However, I didn’t exactly come away wanting.

Well, that’s not quite true. It would have been nice if the chunky chin bezel on the Space Monitor contained some sort of speaker or even a webcam. The conceit that Samsung are selling here is that this could be what the future of monitors could look like - yet I found myself running up against limitations where I could be finding pleasant surprises.

The last minor detail worth noting here is the deep grooves that run down the back of the stand, they’re intended to make cable management a little cleaner but I didn’t find that they actually held up that end of the bargain particularly well. Not unless the Space Monitor is sitting flush with your wall, that is.

So, a word of warning and cautionary tale.

The vice-grip on the stand for the Samsung Space Monitor only supports desks that are up to 90mm wide. It’s gonna be worth measuring that out and making sure it’ll actually fit. If you don’t, you might regret it.

How do I know this? Because I did not do that and getting the Space Monitor to attach itself to the back of my desk ended up being a massive pain.

Initially, the back of my desk wasn’t able to accommodate the Space Monitor and I ended up having to make some minor DIY adjustments to resolve the issue. If that’s something you’re unable or unwilling to do, then maybe the Space Monitor’s key selling-point maybe isn’t worth going on all-in on quite yet. Not unless you’re game to buy a new desk to go with it.

Regardless, once you’ve got the vice-grip attached, there’s little in the way of you using the Space Monitor as it was intended. You simply slide it onto the VESA-style mount on the other end of the stand and secure a quartet of screws and you’re good to go.

Even without the 4K found in the 32-inch model, I found the higher WQHD resolution afforded to the Space Monitor a clear and clean upgrade over my usual setup. All my usual bad habits like web browsing, file management and trawling Twitter felt a lot more vibrant and engaging. Even for longer periods of time, the Space Monitor was a feast for the eyes.

Watching video content on the Space Monitor or editing photos on it also proved a highlight. My usual media diet of esports, Youtube, Netflix came across as particularly crisp when it came to the details and especially saturated when it came to the colors. There’s no HDR support here - nor in the 4K model - but it rarely felt like I was missing out. Your own mileage may vary depending on your needs but I came away delighted by what the Space Monitor had to offer.

And where other monitors indirectly dictate where everything else on your desk goes, the Space Monitor freed me up to rearrange my desk and fit more on it in a way that I otherwise wouldn’t have.

Obviously, your experience here is going to vary based on the form-factor of your PC and the size of your desktop but if the question is “Did the Samsung Space Monitor make me happier with the layout of my desktop?” the answer is a positive one.

Last but not least, the Samsung Space Monitor isn’t not really a gaming monitor - but that doesn’t mean you can’t use it for that.

In fact, I’d go so far as to say that the Space Monitor was surprisingly competent when it came to gaming. It’s not as high-end as something like the 240Hz gaming monitors that ASUS and MSI are trading in but 144Hz is still a pretty good refresh rate for most games.

The exotic planetscapes and alien tombs of Destiny 2 had an effervescent vibrancy to them and even the 2D experiences like the monochromatic menageries of Gato Roboto came across in good form. The fact that you can pull the Space Monitor closer to you when needed is just icing on the cake.

Honestly, the Space Monitor feels like a breath of fresh air in the PC monitor space. It’s a little pricey and there are some painfully-obvious omissions but there’s still plenty to like about it. Where other monitor manufacturers are marching lock-step to the steady and predictable  drumbeat of iteration, Samsung have gone back to the drawing board and returned with something different, exciting and genuinely useful.