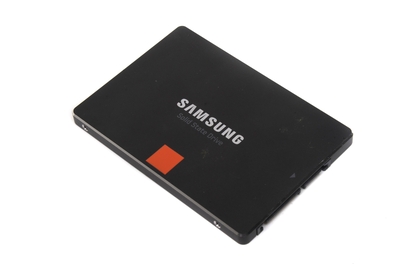 Samsung's SSD 840 Pro is one of the best options on the market if you're looking for a solid state drive with excellent writing, as well as reading performance. It's also one of the lightest units we've seen.

Samsung recently announced a solid state drive capacity of 1.6TB in a 2.5in form factor, so you know that the company knows a thing or two about flash-based storage (and that this author knows a thing or two about lame opening lines). The SSD 840 Pro is another example of how proficient Samsung is in this area, mainly because it's one of the fastest solid state drives that we've tested.

The SSD 840 Pro is a 2.5in drive with a 256GB capacity (it's also available in 500GB and 128GB versions), and it's based on a flash memory type called Toggle-Mode MLC. This type of memory is meant to be asynchronous in the way it works, which, in simplest terms, means the drive should be more power efficient and faster than drives that use synchronous memory (or memory that works with a clock signal). The latter part of that claim was shown to be true in our tests; the SSD 840 Pro proved to be the fastest stand-alone solid state drive that we've tested to date.

In CrystalDiskMark, the drive achieved a sequential read rate of 523.9 megabytes per second (MBps), which is just over 4MBps faster than the recently-reviewed Seagate SSD 600 in the same test. Samsung's drive was even faster when it came to sequential writing, recording 500.2MBps, which is over 40MBps faster than the Seagate, and it was also much faster at random read and write operations. In our file duplication tests, which puts a simultaneous read and write load on the drive, the SSD 840 Pro recorded 265MBps, which is identical to the rate recorded by the Seagate drive.

You can see from these results that it's a drive that will make a great upgrade for any laptop that could use a boost in its performance. Cold boot times in our Dell Latitude laptop were 19sec — this is the time it took for the laptop to boot to the Windows 7 Desktop. It's the same time we've seen from competing drives such as the aforementioned Seagate SSD 600, and also from the OCZ Vertex 3.20 in the same laptop. Importantly, you do notice a major bump in application load times, file movements, and menu operations with this drive compared to a regular, mechanical drive.

We also tested the battery life of our laptop with this drive in it to see if offers much improvement in this area. In our tests, we disable power management, enable Wi-Fi, maximise screen brightness, and loop an Xvid-encoded video until the laptop runs out of puff. With the Samsung SSD 840 Pro, our laptop lasted 3hr 1min. This is approximately what we expected the drive to pull in this test, and it's one minute less than the time that was recorded by the Seagate SSD 600. Against a typical mechanical drive such as a WD Scorpio Black in the same laptop (the standard drive for our laptop), the Samsung's time represents a gain of about 13min. It's worth noting that recent single-platter mechanical drives are just as efficient as SSDs in our test platform's power consumption tests.

Physically, the Samsung SSD 840 Pro is 7mm thick, in a case that's hard and has a standard SATA connection (it supports SATA 3, 6Gbps speeds). It's also one of the lightest SSDs on the market. It tipped our digital scale at only 54g, and this is significantly lighter than the Seagate drive (78g), and the OCZ Vertex 3.20 (87g, though that's a 9mm drive). If you're upgrading from a typical 9mm mechanical drive, then it could represent a weight saving of up to 66g for your laptop. Of course, the drive will also operate silently and it won't put out as much heat as a mechanical drive either. Because it's 7mm thickness is a little less than the 9.5mm form factor of a typical laptop drive bay, you'll have to make sure you secure it properly in the drive bay so that it doesn't move around.

The formatted capacity of the 256GB SSD 840 Pro is 238GB, which means you get an extra 15GB over a 240GB drive. Samsung gives a recommended retail price of $439, which would ordinarily equate to a high cost per formatted gigabyte of $1.84, but the highest price we found it for from online Australian stores at the time of writing was $269, which means its cost per gigabyte is an excellent $1.13. Because it's a Pro drive, it also features automatic self encryption (256-bit AES), and it comes with a 5-year warranty. Basically, if you want to upgrade your laptop or desktop PC with a very fast solid state drive, and one that represents good value for money, this Samsung is an excellent option.

This table shows how the Samsung SSD 840 Pro performed against some other recent solid state drives that we've seen, as well as some thin and ultra-thin mechanical drives.