A fantastic monitor with an HDMI input. 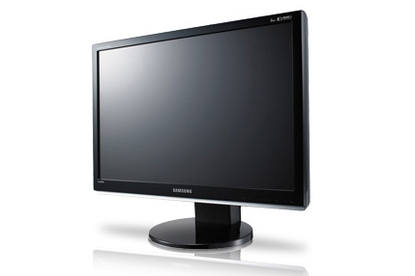 Samsung's SyncMaster 2493 is an almost flawless 24in display. It renders motion excellently, has great contrast and colour reproduction and packs in an HDMI input and a resolution of 1920x1080. Whatever you're using your display for, this unit should cut the mustard.

Sporting an awesome combination of style and functionality, the Samsung SyncMaster 2493HM is a fantastic Full HD display. Featuring HDMI input as well as more traditional ports, this unit offers stunning picture quality and a slick set of touch-sensitive controls, making it an excellent choice for multimedia or gaming.

With a 5ms refresh rate, 2493HM is one of the fastest 24in displays on the market. There has always been a tradeoff for gamers between size and speed, with larger monitors usually offering slower refresh rates. However, this is becoming less and less of an issue, as this unit illustrates. It performed well in our fast motion tests, with only slight trailing evident in the simulations and no noticeable issues during gaming or movie watching. Most hardcore gamers should be satisfied with the 2493HM in this regard.

Contrast performance was absolutely fantastic. The listed dynamic contrast ratio is an impressive 10,000:1, and everything looked excellent in our tests. There was a great level of distinction at both the light and dark ends of our contrast intensity ramps and a high level of detail in dark areas during film viewing. Blacks were wonderfully rich and deep; they were some of the darkest we’ve seen on a monitor.

This resulted in colours looking great. Everything was vivid and bright, with accurate hues and saturation levels. One thing that really impressed us was our colour-on-colour tests. Often we find text of one colour over a different coloured background results in some detail loss and aliasing on the text’s edges, but that wasn’t the case here.

Indeed, the image was crisp and sharp throughout all of our testing. Text was clean with no artefacts and the Desktop looked fantastic.

The only complaint we can really muster is that the vertical viewing angle is somewhat narrow. We noticed when slouching in our chair that we lost contrast toward the top of the screen; however, if you have your unit positioned properly you shouldn’t really encounter this. Fortunately, there was almost no colour shift noticeable on the horizontal axis.

The HDMI input, coupled with the display’s 1920x1080 resolution, makes this monitor an ideal companion to a high-definition games console or Blu-Ray player. There is also the standard combo of DVI and D-Sub ports for your PC.

We were big fans of the 2493HM's design. It has a glossy bezel that appears at first to be black, but also seems to contain hints of red, much like Samsung’s TV series. There is also a silver line running along the base. All of this adds up to a truly fantastic-looking display.

The controls also add a touch of class. Rather than conventional buttons, Samsung has gone with touch-sensitive pads. They look smooth but can be a little fiddly at times. All the calibration options you’d expect are available, including colour tone, contrast, brightness and position. You can also raise, tilt or swivel the panel.