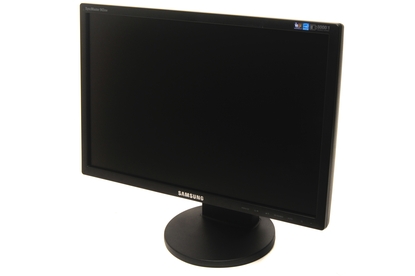 Samsung's latest SyncMaster is an ideal monitor for an office environment. The Samsung SyncMaster 943BW combines a minimalist yet classy design with excellent image quality for a reasonable price.

It hasn’t been designed for gaming, but the sleek, 19in Samsung SyncMaster 943BW LCD monitor will be a capable performer in an office environment.

The Samsung SyncMaster 943BW has a straightforward design. There is little bling or style here, with Samsung using a simple matte black bezel and stand. This isn't necessarily bad news, though; in fact, we really appreciate this simple design. The bezel is slim and the matte surface of both the display and the surrounding casing means the Samsung SyncMaster 943BW doesn't reflect fluorescent office lighting like many other monitors.

Despite the reasonable asking price, build quality is excellent. The height-adjustable stand feels sturdy and the monitor pivots, rotates and tilts in multiple directions. On its rear the SyncMaster 943BW has slots for a standard 75mm VESA wall mount. A slight annoyance is the controls, which are located on the bottom of the bezel. These touch-sensitive buttons are responsive but they aren't backlit, so using them at night or in especially dim environments is impossible.

The Samsung SyncMaster 943BW includes DVI and VGA ports, but Samsung doesn’t include a DVI cable in the sales package. Conveniently, the source button allows one-touch switching between D-Sub and DVI signal inputs. The SyncMaster 943BW lacks built-in speakers and doesn't include HDMI or USB ports — this isn't too much of an issue, though, as it isn't designed for multimedia or gaming.

The monitor has a native resolution of 1440x900 and uses a TN panel. It has a 5ms response time and a dynamic contrast ratio of 8000:1, and it only has a 1000:1 contrast ratio when this is switched off. Image quality is excellent for general use and the SyncMaster 943BW produced good contrast with only minor tweaking necessary. There is also minimal backlight bleeding.

It is worth delving into the menu as Samsung has included many useful features, headed by MagicColor and MagicBright. MagicColor increases the brightness and is ideal for viewing images, while MagicBright is a set of pre-programmed colour modes including sport, movie, dynamic contrast, text, Internet and game. In a regular office environment, we found Internet mode to be the ideal setting, though the colours produced in some of the other modes are excellent. Colours aren't oversaturated and are fairly accurate in most instances. Text is displayed accurately with minimal aberrations.

Despite not being targeted at gamers, the SyncMaster 943BW handles motion well, with little ghosting during action movies or games. It does tend to blur excessively fast images, but we expected to encounter such issues on a monitor clearly designed for a work environment.

The vertical viewing angles of the Samsung SyncMaster 943BW are a weakness; they are relatively poor. The horizontal viewing angle is much better, with little colour shift. Overall, though, this isn't the best choice if you are planning on having multiple people view your screen at the same time.