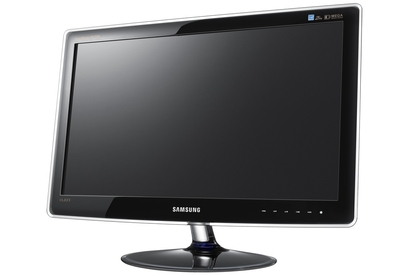 Samsung's 23in SyncMaster XL2370 LED monitor is one of the best looking displays on the market, and its performance is equally impressive. Excellent brightness and colour make this a great monitor for a variety of purposes.

LED-backlit televisions are all the rage right now, and this technology is slowly trickling into the monitor space. Samsung is one of the leaders when it comes to LED TVs, so it's no surprise to see it release an impressive Full HD, LED-backlit monitor like the 23in SyncMaster XL2370.

The Samsung SyncMaster XL2370 LED monitor is one of the thinnest monitors on the market. It's sleek and relatively light. The stylish, glossy black bezel has a transparent overlay around the edges, as does the base. This gives the monitor a distinctive look.

The Samsung SyncMaster XL2370's screen has a matte finish, so reflections aren't an issue. This means it's ideal for use in an office with fluorescent lighting. Unfortunately, the SyncMaster XL2370 isn't height adjustable and it can't swivel or rotate. Though it feels well constructed, it tends to wobble on its stand when pushed.

The Samsung SyncMaster XL2370's on-screen display is accessed via touch-sensitive controls on the bottom right of the bezel. The buttons are hidden when not in use and by default only light up when tapped (there is an option to have them lit permanently). They are fairly responsive, though sometimes they require an extra tap to activate.

The Samsung SyncMaster XL2370 LED monitor is a Full HD display with a resolution of 1920x1080. It includes DVI and HDMI inputs, an analog audio output and an optical digital audio out port. There is no VGA port, but Samsung includes a DVI to VGA cable in the sales package.

The overall performance of the SyncMaster XL2370 LED monitor is very impressive. Brightness levels are excellent without affecting black levels, colour reproduction is outstanding and there is no sign of any ghosting during fast movement in games or movies. The monitor displays a very natural looking image that is ideal for a variety of uses.

We did notice slight backlight bleeding on the top and bottom edges of the screen, and viewing angles aren't great (though this is to be expected from a TN panel). There are no issues when viewing the screen from directly in front, but horizontal and vertical angles result in noticeable colour shift and darkening.