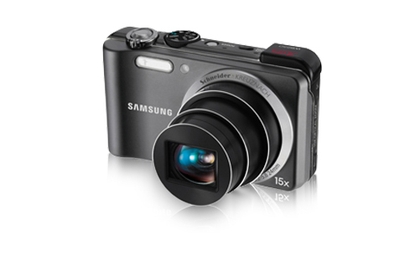 The Samsung WB600 is an affordable digital camera that packs a host of interesting and useful features. It has a 1/2.3 CCD sensor packing 12 megapixels and it boasts a 24mm wide angle lens that extends all the way up to 360mm (15x optical zoom). The lens is optically stabilised and the camera supports full manual controls and offers aperture/shutter priority mode and manual mode. It has a bright 3-inch LCD for composing and reviewing images.

The WB600 also records 720p HD video at 30fps in the h.264 format. Audio is recorded in stereo, and you can zoom during video recording. There is also a dual image stabilisation mode to let you take sharper images in low light or while shooting tele photos. The dual IS mode employs both optical and digital IS systems. Like the older WB550, the WB600 also offers mini-HDMi connectivity to let you view captured images and video directly on your HDTV. ISO speed starts from ISO80 till ISO3200. The camera includes face detection and recognition that adjusts the focusing and exposure for up to 20 faces. Smart Face Recognition also lets you quickly search for registered faces from the photo album. Samsung's Beauty Mode is also included in the 15 scene modes available on the camera.

The Samsung WB600 feels slightly bulky compared to the compact zoom cameras currently available in the market. However, despite its plastic body, it has a sturdy build and good looks. The Samsung is available in three colours (dark brown, metallic black and silver) and we received the dark brown version which looks classy and its frozen-metallic colour finish looks good. The camera is a somewhat heavy at 210g but still pocketable.

The Samsung WB650 took about three and a half seconds to start up, which is slow. Focusing was quick outdoors and it took a little longer in low light. Shot to shot time is disappointing at 6 to 7 seconds with flash on and 5 seconds without flash. Shutter-lag with pre-focus is very good at 0.2 seconds while 0.5 seconds without pre-focus is just average. At full image resolution and at best image quality settings, the continuous drive mode let us capture at 0.79fps; however, at low resolution, this goes all the way up to 6.5fps. When it comes to capturing those magic moments, the Samsung WB600 with its average shot to shot time and slow boot time is not the best choice, but for regular use, it will be just fine.

From its widest angle to its tele-end, the lens took 3.3 seconds which is slow and the camera took a little time to respond when we cranked up the zoom ring. Centre sharpness is good at both the tele-end and wide-angle. Softness in corners was slightly visible. Chromatic aberration was controlled well and just slightly visible in high contrast areas. Our wide-angle shots also showed slight barrel distortion but it wasn't much of an issue. Macro shots came out great with the lens being able to capture subjects which were as close as 3 cm. The dual IS mode is very efficient while shooting tele photos and with the mode on, our tele photos came out sharp and clear.

The Samsung WB600 captured images with good exposure and nicely saturated colours. Images had vivid colours and it was fun to shoot landscape and outdoor photos. There were some exposure issues from our outdoor shots though as the bright areas of the pictures like the sky lost out on details and looked overexposed. However, the shadow details were captured well with only a slight hint of noise.

Indoor shots came out just above average with the flash working within its range. We did not face any red-eye issues even in auto mode. Images from our indoor shots showed some noise starting from ISO400 which is a bit disappointing. The camera still captured rich colours and details but images at ISO 400 were below par which made the WB600 more suitable for use outdoors rather than for low-light shooting.

HD video captured showed smooth transitions and good colours. It looked slightly soft but good enough to let you capture some nice home videos. We saw some noise in the indoor video clips but we've seen that from other compact cameras as well.