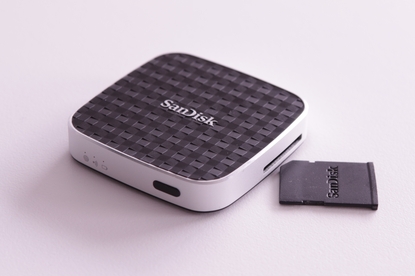 This SanDisk drive gives you the ability to carry lots of video and music files that can be wirelessly streamed to a smartphone or tablet. Additionally, it can be used to store data from those devices. It's small, and it worked well in our tests.

SanDisk's Connect Wireless Media Drive is a highly mobile storage device that can be used to wirelessly serve media to your smartphone or tablet, whether it's based on Android or iOS. The Wireless Media Drive is available with either 32GB or 64GB of internal solid state storage, and it even has an SD card slot on the side so you can share photos from a digital camera, or just increase the drive's capacity.

The Wireless Media Drive measures 65mm long, 65mm wide, and is 15mm thick. It feels very well made, with sides that are one piece, and top and bottom panels that don't flex. The top has a textured, chequered pattern on it, while the bottom has an ample rubber stop to keep the unit from sliding around when it's placed on a flat surface.

It's designed to be an on-the-go device, and can easily be carried around in a pocket when it's to be used on public transport or at the park. To get content onto the drive, simply plug it into a USB port on your computer and drag and drop files over to it. The USB port is also used for charging the drive. The only other physical features are a power button, and status indicators for Internet, Wi-Fi, and battery.

How does it work?

The Wireless Media Drive emits its own wireless network (single-band, up to 802.11n), and it can directly connect to a smartphone or tablet when you are on the move. Simply look for the SanDisk network that shows up in your list of wireless networks and connect to it (it's open by default).

In order to access any content from the drive, you must install the SanDisk Wireless Media Drive app from the App Store, or the Google Play store. You must have this app installed before you connect to the Wireless Media Drive, primarily because connecting to the drive means you will lose Internet connectivity and won't be able to download and install it after connecting to the drive.

The Wireless Media Drive app allows you to not only change settings on the device, but also to browse any files you have stored on the drive. You can view files according to the folder they are stored in, or you can simply check the various media folders for your content; the app sorts all videos, music and photos, and places them in their respective folders. If you have lots of files, it can be easier to just browse by folder, rather than by content.

Advanced settings can be accessed via the app, which allow you to do things such as change the Wi-Fi name and password (you will want to do this as a matter of good security practice), and even to transfer and backup your contacts to the drive as vcf files (if you use Android). You should also change the admin password (it's admin by default), so that others who connect to your drive can't play with your settings.

Up to eight devices can connect to the Wireless Media Drive simultaneously, and up to five HD movie streams can be played back at the same time. This makes it a good way to share content among friends and family. It could be a good way to keep kids entertained on long trips: store all of their favourites on the Wireless Media Drive, then stream the content to their tablets or phones.

The 1500 milliamp-hour lithium polymer battery inside the unit is said to last up to eight hours, but this can vary depending on how many connections and streams are active at the same time. To give you some perspective, the app reported 56 per cent of the battery remained after almost 4.5 hours of streaming to one device while connected to our Wi-Fi network.

You can extend the life of the Wireless Media Drive if you carry around a mobile charger. We tried it with a Sony Portable Charger; the Wireless Media Drive kept playing while we plugged in the charger to replenish the battery (the battery indicator on the drive flashes to let you know it's charging). It's worth noting that if the Media Drive is plugged into a USB port on a computer, it can't be accessed via the wireless network at the same time.

Using the Internet while connected to the drive

One thing you will have to configure if you want to make the most of the SanDisk Wireless Media Drive is an Internet connection. The way this works can be a little complicated. Once you've got the app installed and can access the drive, you will have to go into its app's settings and click 'Connect to the Internet'. What you need to configure from here is a pass-through for the drive so that it can access your regular Wi-Fi network.

The first step is to select the Wi-Fi network from the list, then enter your password. By doing this, your phone or tablet can continue to use your existing Wi-Fi network, while at the same time still being able to access the Wireless Media Drive through the SanDisk app, allowing you to continue to receive email, tweets and Facebook alerts in the background while you watch.

If you are out and about and want to use the Wireless Media Drive while still making use of your data connection for Internet access, then you will have to turn on the hotspot feature on your device and enter its details into the SanDisk app. When an Internet connection is detected by the drive, it's little green Internet light will come on.

Is it any good?

During our test period, the SanDisk Connect Wireless Media Drive performed all of its intended tasks. We had no problems playing back video files up to 1080p, though the drive performed better (that is, videos started sooner and didn't stutter) when we had a direct connection, rather than going through our regular Wi-Fi network that had existing traffic on it. That said, wireless transfers aren't fast. It took over 2min to transfer an MP3 album from our Galaxy Note II to the SanDisk Wireless Media Drive, at a rate of just over 1 megabyte per second (MBps). It went at 1.6MBps when transferring a single video file. Like we said, though, streaming video was smooth to up to two devices during our tests.

We think the app is very easy to use for configuring the device, accessing and playing content, and also for transferring content from a mobile device to the drive. However, the iPhone version looks better than the Android version, and it also shows more details, such as how much space is available on the drive. We couldn't find a way to check storage space with the Android 1.6.5 version of the app. Another boon for iOS users is that the drive can be used to playback DRM content from iTunes.

Videos play within the app as long as the file types are supported by the device, but an external player might be needed for file types that are unsupported (such as mkv). For iOS devices, you can use the It's Playing app, while for Android you can use something like MX Player.

It's a convenient device to use if you want to carry more movies and music with you than your mobile device allows, and you won't have to rely on the Internet or the Cloud to access anything. It's also a good one if you're a photographer who wants a solution to the problem of immediately sharing photos while you are on-the-go (and your camera doesn't have Wi-Fi).

The cost is about $140 for the 32GB version and $180 for the 64GB version. It can be purchased from Harvey Norman. If those capacities seem small, the SD card slot can be used to expand its space by up to 128GB.