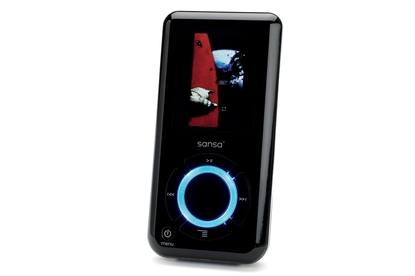 We had a look at the SanDisk Sansa e280's sibling, the Sansa e260, several months ago. The SanDisk Sansa e280, an 8GB version, is another player that, despite its obvious imitation of Apple's iPod nano, may struggle to convert Apple iPod fans – particularly without support for Apple Mac OS X.

SanDisk Sansa e280 has a raised control wheel, but the SanDisk Sansa e280's is a rough plastic ring that's more grind than click. This makes accessing surrounding buttons difficult, but is at least precise.

But why copy the iPod nano? The SanDisk Sansa e280 has 8GB of memory, which is further expandable via a microSD slot (used only for music). Since the SanDisk Sansa e280 is recognised as a hard disk by your PC, it can be used as a straight storage device and also lets you drag-and-drop music and data files on to it – a simpler approach we've yet to find.

For videos and photos you need to use the Media Converter SanDisk supplies, but the SanDisk Sansa e280 bests the iPod nano's 1.5in slideshow with a 1.8in screen which makes viewing video a noticeably more comfortable experience.

While the SanDisk Sansa e280's buttons can be confusing, the icon-driven interface is simple to use and the music library settings are pretty standard. It's easy to manage playlists and track ratings from the SanDisk Sansa e280, although playlists are deleted at shutdown, and we appreciated having a choice of music playback options during slideshows.

If value is a priority, the SanDisk Sansa e280 more than delivers.