The Sangean WFT-1D DAB+ is both a media streamer and a digital radio. 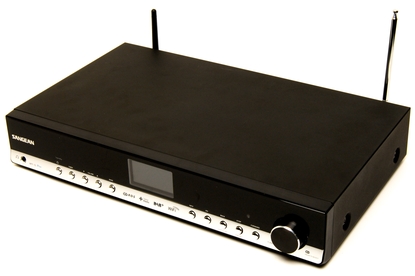 The Sangean WFT-1D DAB+ media streamer is stylish, and it can receive digital radio. You can also use it to listen to Internet radio and play shared media over a network. We were disappointed at the inability to pause or fast forward tracks, however.

The Sangean WFT-1D DAB+ media streamer can receive FM radio, DAB and DAB+ signals. Using its Wi-Fi or Ethernet connection it can stream Internet radio and play shared media from a network.

The Sangean WFT-1D DAB+ media streamer has a black chassis that won't look out of place in any home entertainment setup. The control buttons on the front are self-explanatory and provide menu/volume/band control, while the clicking scroll wheel works well to speed up the selection of stations, tracks and other menu items.

You can connect headphones to the Sangean WFT-1D DAB+ via a port on the fascia and speakers via the stereo RCA cables on the back. At this price point we'd like to see an optical digital audio or coaxial digital audio output as seen in the similarly priced Logitech Squeezebox Duet media streamer.

Digital music usually comes in a stereo format, so you won't notice a difference for most of your tracks. The Australian distributor Canohm assures us that a version equipped with an optical audio out port will reach our shores by Q4 2009.

One of the Sangean WFT-1D DAB+ media streamer's main selling points is its ability to tune into DAB+ radio thanks to its DAB+ chip. Digital radio offers much better sound quality than FM and AM can, and it avoids the fuzzy static you're often forced to endure by locking onto the strongest available signal. The Sangean WFT-1D DAB+ media streamer has two search methods, one a fast skim and the second a detailed search. We found that the second search uncovered all the stations available at time of print.

Digital radio is currently in a trial period in Australia, and you can expect every capital city (except Hobart) to have DAB+ signals available from 1 July, 2009, onwards. If you have a digital radio now, make sure it can handle the industry standard DAB+ signals because DAB broadcasts will be phased out.

The ability to tune into and play Internet radio is also a major plus. Once the Sangean WFT-1D DAB+ media streamer is connected to the Internet, changing the "band" to Internet radio will give you access to thousands of stations from around the world. The audio quality will depend on the strength of your connection and the bit-rate the source station broadcasts in.

To access wireless networks, enter passwords or search for stations, you use the scroll wheel to scroll through a list of letters and numbers. This means that long passwords or names take a while to enter.

Any media being shared on a network can also be played through the Sangean WFT-1D DAB+ media streamer. Formats supported include Real Audio, MP3, AAC and WMA. A major downside with the WFT-1D is its inability to fast-forward, rewind or pause selected tracks. We could only skip and stop tracks, and had to re-enter the menu with the scroll wheel to play a song from the beginning once stopped. The bundled remote control emulates the buttons on the face-plate, with the addition of numbers. At this price point, the lack of the ability to pause or fast forward a track is a big disappointment.

While the Sangean WFT-1D DAB+ media streamer is an attractive and efficient device for receiving DAB+ signals, Internet radio, FM radio and shared music via wireless and Ethernet connections, its lack of basic controls and provision of only two types of audio ports mean that you should think hard before buying it.