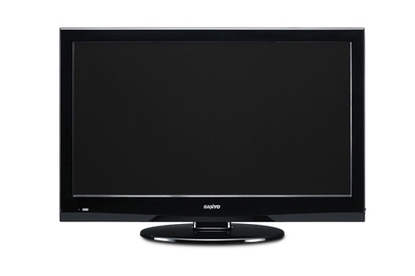 Sanyo's LCD32XRDA9 is good for anyone with a large DVD collection looking to upgrade their TV on a budget. It's not the best option for video game fans, though.

The Sanyo LCD32XR9DA is a reasonably priced 32in LCD television with a high brightness level and good up-scaling of low resolution sources. This makes it a good choice for anyone wanting to watch their DVDs on a new screen without breaking the bank.

The Sanyo LCD32XR9DA LCD TV doesn't exactly break the mould when it comes to design: it has a flat, glossy black bezel that's slightly thicker at the base. It looks the same as the other mid-size LCD televisions we've tested. That's not to say it looks bad — the black is unobtrusive and the bezel isn't unsightly.

One advantage the Sanyo LCD32XR9DA has over some of its competitors, like the Kogan 1080P-32, is three HDMI ports (instead of the two typically seen). Composite, component and VGA analog connectors are also available. We would have liked to see one of the HDMI ports mounted on the side, but few models in this market segment have this.

The TV's 1366x738 panel is par for the course at this screen size, though 1080p models are starting to become common at similar prices. A static contrast ratio of 3000:1 gives the Sanyo LCD32XR9DA LCD television a satisfactory amount of range when displaying white and black tones, although it doesn't have an option for dynamic adjustment. DVD content is well suited to this screen — we connected an older DVD player outputting video at 480p and found the LCD32XR9DA's internal scaling to be well up to the task. DVD video of The Matrix looked vibrant and had a reasonable amount of detail. Blu-ray video through a Panasonic DMP-BD60 Blu-ray disc player looked detailed, though we found footage played at 720p from the BD player to look superior to 1080p when viewed on the Sanyo LCD32XR9DA — most likely due to the less-intensive scaling process required.

The Sanyo LCD32XR9DA LCD television lacks a 100Hz mode and doesn't have a low response time. At 6.5ms it's slightly slower than most other models of this size, and this manifested itself as very slight ghosting when watching fast motion video or playing our Xbox 360 and PlayStation3.

If you're primarily watching free-to-air television or your collection of DVDs, the Sanyo LCD32XR9DA LCD television is an acceptable choice.