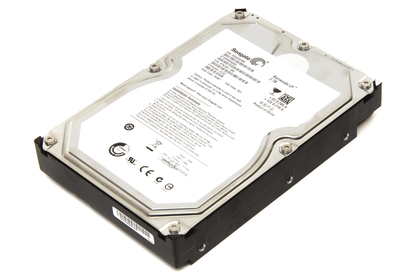 The Barracuda LP (ST32000542AS) is the first internal hard drive from Seagate to store two terabytes of data; 2TB is currently the maximum capacity of a single 3.5in SATA 2 drive. The Seagate Barracuda LP also manages to cut down on energy consumption compared to conventional 7200rpm hard drives while retaining reasonable performance.

The Barracuda LP 2TB internal hard drive features four platters of 500GB each and has 32MB of cache. The drive spins at 5900rpm, an unconventional figure that sits between the 5400rpm of slower internal hard drives and the 7200rpm often found in standard 3.5in desktop drives.

The "LP" in Barracuda LP (ST32000542AS) stands for low power. Much like Western Digital's equivalent drive, the Caviar Green 2TB, the Barracuda LP focuses on power efficiency. Western Digital heavily markets the "GreenPower" features like a variable spin speed that aid the Caviar Green's power efficiency, but beyond the 5900rpm spin speed Seagate doesn't specify the power-saving measures employed in the Barracuda LP. Nevertheless, the effect is noticeable.

During our tests the Barracuda LP 2TB consumed 5.2 watts when idle, which is 1.5W higher than Western Digital claims its Caviar Green internal hard drive consumes. When writing data it consumed 5.8W of power and when reading data its power consumption jumped to 6.4W. Performing a simultaneous read/write operation caused the drive to consume 6.3W. As the Barracuda LP 2TB has a constant spin speed, power consumption was more consistent than the Caviar Green, which spins the drive's platters at variable speeds. Overall, the Barracuda LP consumes less power than most 3.5in internal hard drives, but the energy savings aren't as significant as the Caviar Green's.

We tested the hard drive by transferring data between it and a 300GB Western Digital VelociRaptor. In these tests, the Barracuda LP 2TB performed significantly better than the Caviar Green 2TB.

The hard drive wrote 20GB of 3-4GB files at 73.8 megabytes per second (MBps) and read the same data at 79.5MBps. It copied this data from one folder on the hard drive to another at a rate of 29.8MBps. In our small file test, comprising 3GB of 1MB files, the Barracuda LP 2TB wrote at 50MBps, read at 76.5MBps and performed a simultaneous read/write operation at 30.6MBps. These speeds are all significantly higher than the Caviar Green 2TB, which was 10-30MBps slower in both read and write tests.

The operating temperature averaged 36 degrees Celsius, which isn’t significantly different from 7200rpm Seagate internal hard drives like the Barracuda 7200.12. However, the slower spin speed does mean the drive is barely audible, with only some noise noticeable during intensive operations.

If you need 2TB of storage, Seagate's Barracuda LP internal hard drive is a good choice and delivers decent performance.