Seagate's first NAS device is easy to use but slow 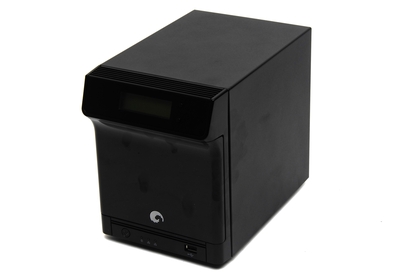 Seagate's BlackArmor NAS 440 is quite easy to use and maintain, particularly if you need it to back up data from up to 10 computers at a time. However, you'll need at least two of these NAS devices if you want to keep your data secure.

Seagate's first network-attached (NAS) device, the BlackArmor NAS 440 (ST360005SHA10G-RK), offers the ability to encrypt volumes, easily manage RAID arrays and administer users. However, it's not without its flaws.

The Seagate BlackArmor NAS 440 (ST360005SHA10G-RK) has an LCD on the front, but you can't configure settings — it only displays the status of the NAS device. The four hot-swappable drive bays have 3.5in Seagate hard drives installed, though the specific model depends on the configuration you purchase. Our review unit was filled with four 1.5 terabyte Barracuda 7200.12 hard drives for 6TB of raw storage space. This configuration isn't currently available in Australia, though Seagate also offers 4TB and 8TB capacities for $1599 and $2599, respectively.

Each drive bay is lockable and, if you need to replace a drive, the trays are conveniently tool-less.

The BlackArmor NAS 440 provides four USB 2.0 ports (one on the front) and two Gigabit Ethernet ports which support failover.

Seagate doesn't disclose the specific internal components, though the NAS device's processor is known to be clocked at 1.2GHz. It is accompanied by 256MB of memory. This certainly isn't a powerhouse, particularly when you compare to NAS devices boasting an Intel Atom or Core 2 Duo processor with 1 or 2GB of memory, like the QNAP TS-459 Pro Turbo NAS. 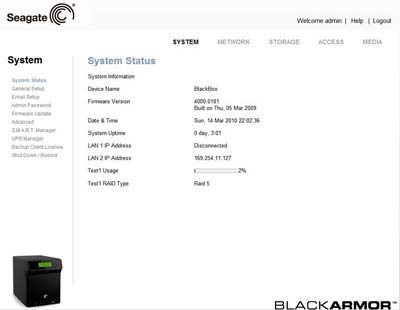 The Web-based BlackArmor Manager interface is clean and efficient.

Seagate has implemented one of the cleanest Web-based user interfaces we have seen on the BlackArmor NAS 440, making it easy to navigate and configure. Our main qualm was the need "claim" a newly inserted hard drive before you can add it to a volume. This only takes a few seconds, however, and isn't really frustrating.

The NAS device supports RAID levels 0, 1, 5 and 1+0 as well as JBOD configurations, with the Web UI customising the available options depending on how many drives are chosen for a volume. The user interface even provides a time gauge for the RAID build, which is very handy for RAID 5 builds that can take up to six or seven hours at a time.

An automatic firmware updater is available, and the NAS device provides the usual niceties like dynamic DNS, user quotas and UPnP/iTunes media servers. Supported network protocols include SAMBA/CIFS, NFS, FTP and HTTP/HTTPS. While Seagate offers a Mac-compatible discovery utility, there is no direct support for AFP or Bonjour network protocols, so Mac users will have to suffice with SAMBA or FTP file access.

Backup is the weak link in the BlackArmor NAS 440's chain. You can set up and manage backup schedules between the NAS and USB storage, as well as online remote replication from one BlackArmor to another. However, there is no support for backing up to or acting as a backup for a non-Seagate NAS device. Without an open source standard such as rsync or FTP backups, the BlackArmor offers a disappointingly closed ecosystem for data security.

Thankfully, local backup isn't so crippled. Seagate's bundles the Acronis-based BlackArmor Backup software suite with the BlackArmor NAS 440, affording Windows users a number of tailored backup options as well as hard drive cloning and management tools. The Web user interface provides a licence manager, allowing you to import and manage up to 10 BlackArmor Backup serials at a time.

The software initially encourages you to create a backup image of your entire computer, but other options like "Try and Decide" let you manage system restore points when installing software that may corrupt the system. You can back up based on file format groups — such as just music or only documents — but, unlike the WD SmartWare software in Western Digitial's My Book Elite, you can exercise extensive control over the file types included and to which group they belong.

By default, the Seagate BlackArmor NAS 440 aligns all four 1.5TB drives in a RAID 5 array, providing 4.5TB of storage with one drive redundancy. We tested the NAS device's performance using this setup as well as both four-drive and two-drive RAID 0 configurations in order to place it on a level playing ground with competitors.

We test all NAS devices connected through a Gigabit Ethernet network to a testbed PC with a 300GB Western Digital Velociraptor hard drive. We run Intel's NAS Performance Toolkit, which determines how the NAS device performs when streaming 720p high-definition media from the device as well as the ability to record the same video while performing backup operations.

The BlackArmor NAS 440's default RAID 5 configuration naturally lags behind some of the other NAS devices we've tested, since it has to account for redundancy when writing data and performing simultaneous tasks. However, changing to a RAID 0 array — in both two- and four-disk configurations — didn't make a huge difference in performance. You'll get speedier results when writing large files, but overall the NAS device's ability to read data and stream content to other devices is on par with lower-powered devices like Synology's Disk Station DS409.

Remote replication and performance are two big issues with the BlackArmor NAS 440, but there are still a number of positives to this NAS device. The clean user interface makes it easy to manage, while the tool-less drive trays and tightly integrated BlackArmor Backup software make single computer backups easy to implement for up to 10 simultaneous users.