If you don't want a central backup server or NAS device, the BlackArmor WS 110 external hard drive will give you tight reins over when, where and how you back up files from a computer.

The case looks similar to the consumer-targeted FreeAgent Pro external hard drives. The drive can be placed horizontally or vertically without a stand, though one is provided just in case. Unfortunately, the hard drive is quite loud — particularly when spinning up — and even caused some minimal vibrations on the desk during intensive transfer tasks.

The BlackArmor WS 110 packs in a single 3.5in 2TB hard drive with a formatted capacity of 1810GB. At the BlackArmor's current RRP, you are paying 22c per formatted gigabyte, which is what we'd expect for an external drive this size. 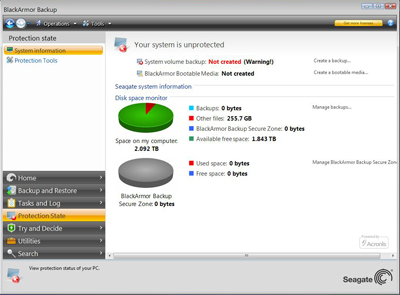 Seagate's BlackArmor Backup software provides many options that can be tailored to suit different users.

The drive is bundled with the same BlackArmor Backup software as Seagate's NAS devices. Developed by Acronis, the Windows-only BlackArmor Backup suite is refreshingly comprehensive. Though the software encourages you to initiate a backup for your entire computer, it also provides a number of tailored backup options as well as hard drive cloning and management tools. These include a "Try and Decide" option that lets you manage system restore points when installing software that may corrupt the system.

Like Western Digitial's My Book Elite, the software can back up files based on groups of file extensions; all photos or music for example. Unlike the overly simple WD SmartWare software, however, you'll be able to heavily customise what file types are backed up and to which group they belong. Our only hiccup was when the software failed to recognise the BlackArmor WS 110 while it was connected over eSATA; a hot patch from Seagate's Web site quickly fixed this, however.

A second piece of software bundled with the BlackArmor WS 110 external hard drive is Seagate's SafetyDrill+, which allows you to create a bootable disk in case of a system crash.

We tested the Seagate BlackArmor WS 110's file transfer speeds over both USB 2.0 and eSATA. Our storage file transfer benchmarks are conducted using a 300GB Western Digital Velociraptor hard drive. Our test files include a 3GB batch of 1MB files as well as a 20GB folder of individual 3-4GB files.

The BlackArmor WS 110's eSATA connection, comprehensive software and reasonable price make it a good choice for securely backing up a single computer.