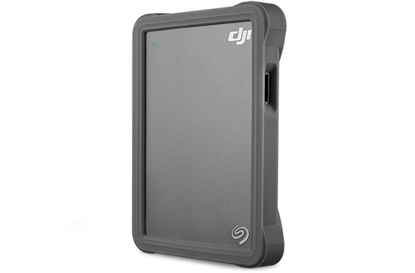 If you’re looking for a portable hard drive to pair up with your drone, the Fly Drive is a good option - but it doesn’t really endear itself as an optimal or particularly innovative one.

As per Moore’s Law, hard drives have always gotten both bigger and cheaper over time. However, until the very-recent jump to 4K, it felt like the appetites of users might struggle to keep up and put the category’s finest through their paces. After all, with four times the resolution and picture quality comes four times the storage necessary to hold onto your footage. It doesn’t take long for the numbers to add up and the portable hard drives to pile up. Anyone serious about filming in 4K is probably pretty familiar with this already.

It’s exactly those people that DJI and Seagate are aiming at with their new, co-branded, Fly Drive.  Specifically, as the product’s name suggests, they’re aiming at 4K drone photographers. Until now, this target has pretty much been stuck with  MicroSD cards for their storage needs. The Fly Drive is pitched as a rugged, portable hard drive that cuts down on the pain points often encountered in the field.

With 2TB of capacity, Fly Drive promises to streamline the editing process by letting you store, consolidate, and organise over 250 flights worth of content into one portable external hard drive.

The Seagate DJI Fly Drive is a 2TB hard drive. It weighs about 0.2kg and comes with an optional, rubberized protective bumper (similar to the bumper found in LaCie’s Rugged range of hard drives).  It’s packing a single USB-C port and a UHS-II MicroSD slot on the side.

It also comes with a two-month membership for Adobe Premiere Pro CC.

Design-wise, the Fly Drive is pretty much as bog-standard as portable hard drives come. It’s a grey, utilitarian rectangle branded with the Seagate and DJI logos. The rubberized bumper the case with adds a little bit more character, but not a whole lot more. Seagate haven’t exactly reinvented the wheel here, but it’s hard to really hold it against them too much.

You can tuck away the USB-C to USB cable it comes with inside the rubberized bumper, which is neat. However, Seagate weren’t able to specifically grade or quantify the degree of protection the bumper offers but did advise that it was designed to provide protection around the edges of the hard drive against intense drops as well as to protect the finish from knicks and scratches.

Conventionality is the name of the game here. Still, I couldn’t help but wish Seagate were able to streamline the process of moving my drone footage from MicroSD to the hard drive to a greater degree. It would be brilliant if there was some process by which you could automatically mirror or backup the content on your MicroSD onto the hard-drive itself. Having an additional 2TB of storage-space to play with has its advantages, but it would be even better if I could effectively utilise that storage without a laptop or PC having to fill in as a go-between. As it stands, the Fly Drive functions exactly like every other hard drive out there. You still have to manually copy and paste your footage over. There’s just more branding attached.

In terms of performance, the Fly Drive is no slouch. Generally-speaking, it’s pretty comparable to Seagate’s usual, consumer-grade fare.

Backing up 2.53GB of 4K drone footage took 2 minutes and 5 seconds to shuffle from my MicroSD to the hard drive itself. Pulling the same files back over to the MicroSD took a little longer (3 minutes, 18 seconds).

While these weren't exactly the lightning-fast speeds you’d get out of a high-performance SSD, the 2TB sizing of the Fly Drive acts as a pretty counterweight. 4K footage is large, the average battery-life of most drones is short. Unless you’re packing a small army of battery packs with you, you’d be hard-pressed to find a drone capable of filling out the Fly Drives’ 2TB capacity in a single session.

The core idea behind the Fly Drive - a portable hard drive perfect for drone photography - is a good one, and the product itself does a reasonable job of angling itself to towards the needs of that core audience. However, I emerged from my brief time with the product wishing it took things even just a step or two further.

Aside from the rubberized bumper, this is just another  2TB hard drive with slightly-inflated price. Seagate have clearly considered the needs of their target audience but haven’t done a whole lot to mold the product around them beyond the basics.

If you’re looking for a portable hard drive to pair up with your drone, the Fly Drive is a good option - but it doesn’t really endear itself as an optimal or particularly innovative one.