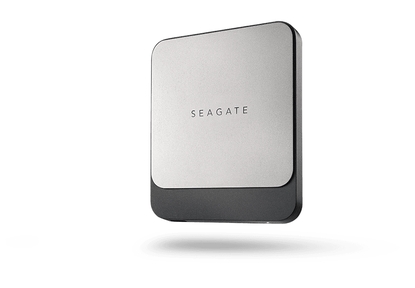 If you’re willing to splurge on the larger sizings, the Seagate Fast SSD makes a very compelling case for itself.

Seagate are about as established in the storage space as these things come. However, until very recently, there’s been a huge gaping omission in their product mix: solid-state storage.

Now, debuting their first internal and external offerings, the company are looking to expand into the SSD space. And if their first Seagate Fast SSD is any indication, the brand’s overdue efforts in the category are not to be overlooked.

Better late than never, I guess.

Again, the Seagate Fast SSD is one of the company’s first consumer storage solutions in the SSD space. But, if you’ve seen any of the competition the company are up against, you probably already have a good idea what to expect from it.

It’s a little larger, and thicker, than Samsung’s T5 - but not by much. Unlike the T5, however, Seagate’s Fast SSD opts for a mix of metal and softly-textured plastics when it comes to feel and form-factor. Though not without a few rounded edges of its own, it makes for a sharp looking contrast to the cool metallic design of its Samsung-branded rival.

And like the T5, Seagate’s Fast SSD only features a single port: USB Type-C. This may irk some. Regardless, if you’re not a Type-C believer, you probably will be after witnessing the gains in performance that going in on the next-generation connectivity technology allows for.

If it sounds like I’m overly-relying on direct comparisons here, that’s because the T5 has been my SSD of choice for the better part of the last year. And Seagate’s Fast SSD is pretty directly aimed at being an alternative to already-available products like the Samsung T5. It’d be silly not to compare the two. They even boast the same max read/write speed of 540/500 MB/s.

And when it came down to it, Seagate’s new Fast SSD lived up to its nomenclature.

Both when used to transfer a 38GB folder full of videos and images to a PC over USB 3.1 and back again, it managed to match Samsung’s T5 tit for tat.

For the T5, the task of initially transferring those 38GB onto itself took 2 minutes and 12 seconds. Seagate’s Fast SSD managed the same task in roughly the same amount of time. It clocked in at 2 minutes and 15 seconds.

Then, when it came to transferring content from an SSD to a PC, the Seagate Fast SSD proved itself a clear winner. Again, using my usual 38GB sample folder, the T5 managed to complete the assigned task in 2 minutes and 4 seconds. The Seagate Fast SSD managed to trump this, doing the same in exactly 2 minutes.

If there’s any area I’m less reluctant to give the Seagate Fast SSD a stronger endorsement in, it’s pricing.

Yes, at smaller sizes, the Fast SSD is a little more expensive than the competition. Yet, if you’re looking to buy in on the 1TB or 2TB models, the difference between how much Seagate’s offering will cost you and that of the competition is genuinely staggering.

If you’re looking to pick up a cheap external SSD storage, there are cheaper and better options out there. But if you’re willing to splurge on the larger sizings, the Seagate Fast SSD makes a very compelling case for itself.