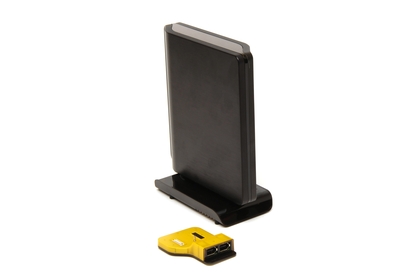 The FreeAgent Pro's large capacity, multiple connectivity options, fast performance and unique design aren't quite enough to justify its high price. If it came with a full version of Memos Autobackup backup software, then we'd rate it higher.

The FreeAgent Pro is a 750GB external hard drive that has a style all its own. It's perfect as a backup drive for a PC, but it can also act as a vast dumping ground for media files.

With a formatted capacity of 698MB and a recommended retail price of $649 (at the time of writing), the FreeAgent Pro's cost per gigabyte is 92 cents, which isn't competitive when pit against the likes of Western Digital's 1TB MyBook. But, it's currently one of the largest capacity single-drive units on the market (1TB drives use two 500GB drives to reach that capacity) so it runs very cool and quiet.

Physically, the FreeAgent Pro is made out of brushed plastic (although it looks like metal) and it has an amber light that illuminates three of its four edges (easier on the eyes than the blue lights of other external hard drives on the market). A sturdy and unique base gives the drive a vertical orientation. It can house two different snap-in modules, depending on the connectivity you require. The package includes one module with two FireWire ports on it (one acts as a pass-through for another drive, while the other connects to the PC) and one module with USB 2.0 and eSATA ports. The modules are held in place by a screw at their base and are very easy to swap.

If your PC has an eSATA port, the FreeAgent Pro will perform even better. The FreeAgent read 4GB of data (and copied it to our test PC) at a rate of 35.71MBps. It wrote the same amount of data (copying from our test PC) at 35.2MBps. Copying 4GB of data from one location on the FreeAgent Pro to another, resulted in a transfer rate of 19MBps, which is much faster than the USB 2.0 connection, and almost on par with what an internal SATA hard drive can accomplish.

This performance, the large storage capacity, and the fact that it runs so quietly, means that it's a well-suited storage device for movies, TV shows and music. However, the FreeAgent Pro also excels as a backup drive. It ships with Memeo's Autobackup application (unfortunately, it's only a 30-day trial version, a full version can be purchased online for $US29), which works in the background and backs up data in real-time. Any changes that are made to monitored drives or folders are almost instantaneously backed up to the FreeAgent while you work. This can have its drawbacks. While ripping a CD to a monitored music folder, for example, Autobackup will start copying the ripped music tracks from the get-go. This can slow down the overall performance of your system as the hard drive needs to work harder to store the ripped music as well as transfer it to the FreeAgent.

While Autobackup is only a trial version, there is a 'System Rollback' feature that is present in the supplied 'Seagate Tools' application. It allows for system checkpoints to be created and for the system to be rolled back. It's similar to Windows' own System Restore feature. 'Seagate Tools' also provides a link to 'Seagate Data Backup', which is a service that allows you to store data online using Seagate's servers, but this isn't a free service. The 'Utilities' in 'Seagate Tools' are simple, but useful: the amber light can be switched off, which is convenient if you find it annoying or don't want to use it as a nightlight, and the 'Drive Sleep Interval' setting can put the drive to sleep after a predetermined period of inactivity.

All these features aren't really enough to justify the drive's high retail price, especially because the supplied backup software isn't a full version. Its performance, and its multiple connectivity options are redeeming factors, and its design is definitely interesting. If you like the look of this drive and you require all the connectivity it offers, then go for it. If you just want a simple USB 2.0 drive with a large capacity, then look for cheaper alternatives.