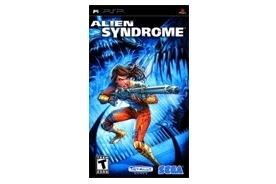 Alien Syndrome fails as a mindless shooter thanks to a number of irritating design flaws. Fans of the original will find little enjoyment here, we're afraid.

A summer sequel you may not have seen coming, Alien Syndrome picks up about a hundred years after the original arcade game. Unfortunately, it may not be worth $80 to save Earth Command all over again.

Like other games of its ilk think Diablo but set in space and with aliens instead of demons Alien Syndrome lets you pick from a variety of classes, each with different starting stats and proficiencies. You can choose to be a melee character, a long range sharpshooter who uses a gauss rifle, a demo expert who wields a bomb launcher, a Marine like character who wields a laser rifle and a Firebug who wields a flamethrower. I started up my initial game as a Firebug, feeling that fire would be just as good for dispatching aliens as a laser gun or melee weapon. The good thing is that as you level up, you can add any proficiency to any character, so there's no worry about choosing the "wrong" starting character.

Unfortunately, the character creation and the subsequent character leveling is the most compelling part of the game. Each level you earn gets you two points for the four base stats (strength, dexterity, accuracy, and endurance) and one point to put towards a specific proficiency. At the end of my game, my character had evolved from a regular Firebug to one with better armor, stronger melee and fire weapons, the ability to recharge health, and one crazy critical hit percentage. There are nineteen proficiencies in all, so there are quite a range of combinations to try. You can even build a character that's specifically useful in co-op mode by taking healing and recharge auras which affect all players (up to four via Ad Hoc) in range.

There's also a ton of loot that gets dropped and that helps mix things up a bit. The amount of stuff you can carry is determined by your strength stat, which also predictably affects your melee damage. In addition to health and energy (used for your temporary shield) pick-ups, you'll find armor, weapons, and add-ons for a nifty little robot friend you have, called a SCARAB. If the items you find are of a grade lower than what you're using or don't have the stat bonuses you want, you can feed them to the robot for salvage and he'll craft you something you do want, like extra ammo. He's like a store that follows you around and even shoots if you mod him that way.

But beyond that, the game is sort of a slog. It never evolves beyond the basic shoot-everything-that-moves model. You enter an area, kill a bunch of enemies, pick up loot, enter another area and kill more aliens. There's something inherently entertaining about the whole experience but it also can get repetitive and tedious after a while.

Also, the controls are tough and take some getting used to. Without a second analog stick a common complaint about the PSP, I know aiming your weapons is an exercise in frustration. You have to move the analog stick in the direction you want to shoot and hold down the fire button to lock your character down in that direction; you can then strafe around. Changing the direction of your aim is a hit and miss affair and you'll waste a lot of ammo just trying to draw a bead on an enemy (thankfully, there's a ton of it lying around).

There is also an issue with slow down when the screen gets crowded, the action would sometimes slow to a crawl. I even experienced a complete hang up of the game when things got really hairy I can't imagine what it would be like during a four person co-op multiplayer game.

The deep character customization options aside, Alien Syndrome is a flawed game with too many quirks to recommend. It's a passable single-player experience but if you can find some friends to play with, it just might help you kill an hour or two here and there.