All-Star Racing doesn't fail to impress on a visual level. 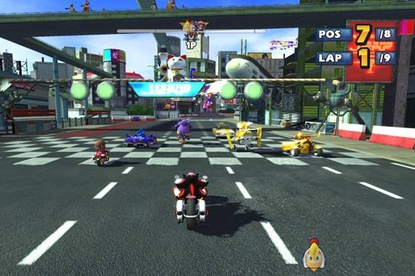 Sonic & Sega All-Stars Racing is an enjoyable game with some innovative tracks and a nice chunk of fanservice for Sega faithfuls, but it isn't enough to bump rival Mario off the go-kart throne. It also isn't enough to re-establish Sonic as a relevant character.

Let's be honest: Sonic the Hedgehog's reputation is in the toilet. His recent titles have been terrible, with only the Summer and Winter Olympics titles -- collaborations with his biggest rival, Mario -- accounting for anything positive. The blue blur's latest effort, Sonic & Sega All-Star Racing, fares better than some of his previous efforts thanks in large part to Sega's rich company history and the presence of some imported talent, but it isn't enough to put him back in the limelight for good. It's a step in the right direction, however.

What stood out the most for me while playing All-Star Racing is just how well designed the tracks are. My favorite track was Roulette Road, a casino themed level where fireworks illuminate a night sky framed by houses of cards. Poker chips rain onto the card-table track and billiard balls coast along the sidelines. The stylized recreation of the Shibuya district in Tokyo, with its huge jumps and just-out-of-reach low flying aircraft, is another memorable course. If anything, All-Star Racing doesn't fail to impress on a visual level.

There is also a lot of fan service paid in the cast of characters. The majority of them are Sega stalwarts like Sonic, Tails, and Dr. Eggman, but there's a nice mix of more obscure characters as well. I had no idea who Opa-Opa was until I looked him (it?) up on Wikipedia -- it's the ship from Fantasy Zone, an arcade shooter that Sega put out way back in the 80's. There's also a cadre of Dreamcast characters including Ulala from Space Channel 5 and Beat from Jet Set Radio Future (the inclusion of several race tracks based on that game made me want a new Jet Set game that much more). Sega also extended invites to Banjo and Kazooie from Rare's classic platforming series, which provides a nice break from the Sega-centric lineup.

Unfortunately, all of the racers feel a little too similar, with only a special All-Star Move to differentiate them. If you find yourself lagging behind the pack the game throws you a bone in the form of these special power-ups hidden inside item crates. These flashy moves will give you a quick jump ahead of the competition in a fashion unique to each character. Beat for example, jumps out of his car and starts tagging his way past opponents, leaving them in clouds of spray paint.

The racing itself is particularly drift-heavy, with more sweeping turns than tight corners. It does have a nice sense of speed -- no surprise considering the Sonic connection -- but when I wasn't boosting or running over the pink zipper lines, everything felt painfully slow. It's incredibly similar to Mario Kart 64, which would normally be a good thing, but Sega did little to expand upon the formula, and as a result, All-Star Racing feels basic and lacking. After picking your character and firing up a race all you really need to do is mash the accelerator against the floor and yank on the drift button when you approach a corner to build boost. There's little in the way of strategy: if there is someone in between you and first place, all you need to do is run through an item box, fire off a punching glove, rocket, or a star (this causes your target's screen to flip upside-down) and zoom past them to the winner's circle. You rinse, lather, and repeat that procedure throughout the entire game. Aside from the generic Grand Prix race mode, the game also includes a mission mode with specific goals, but the controls don't offer enough precision to make completing challenges like collecting enough rings to earn a passing "A" rating and taking out a specific amount of targets with punching gloves easy.

Multiplayer is also an incredibly mixed bag. While the modes themselves work well, the limited options and arenas -- there are only three in total -- kill the potential for fun before you even leave the gate. But the biggest crime is that you can only participate in races against online competition; modes like Battle, the incredibly fun Capture the Chao, Knockout, Grab, and King of the Hill are only available as local split-screen. That unforgivable design decision aside, All-Star Racing is a shallow yet enjoyable racing experience that serves as a nice love letter to diehard Sega fans, but those of you who aren't devoted to the House That Sonic Built will be better off turning to Nintendo's Mario Kart series for a dose of racing fun.