Let's get the inevitable comparisons to Goldeneye out of the way right now: The Conduit is the closest you will get to recapturing the magic of Goldeneye on a Nintendo console 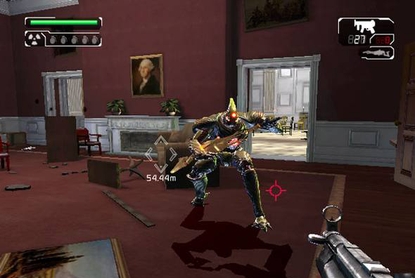 To be blunt, The Conduit is a by the numbers shooter that offers a couple of thrills but ultimately doesn't make much of an impact. If your system of choice is the Wii then I suggest you check it out, as action games are few and far between on the platform and The Conduit does have its positives; anyone who loved Goldeneye will want to give a look as well if only to get a nice dose of nostalgia. But the rest of you shouldn't feel a need to abandon your favourite next-gen shooter for this one.

I'm not sure who I should blame for The Conduit's shortcomings. Do I blame the developer for making a rather generic shooter with a convoluted storyline that isn't as epic or mysterious as it wants to be or do I blame Nintendo for creating a console whose lack of hardware power essentially handcuffs every developer who tries to create a "next-gen" game for it? Hell, maybe I should stay within the game's conspiracy theme and just chalk it up to the Illuminati — they're always trying to ruin everything, right?

Let's get the inevitable comparisons to Goldeneye out of the way right now: The Conduit is the closest you will get to recapturing the magic of Goldeneye on a Nintendo console. I can't speak for the multiplayer because I didn't experience it first-hand (several other GamePro editors did, though, and their impressions are posted in our The Conduit multiplayer preview) but the single-player campaign is definitely reminiscent of Rare's classic; go ahead, fanboys, let the scream of joy out — I'll wait. You done? Good, because you won't like what I have to say next.

See, I consider the similarity to Goldeneye as both a positive and a negative. Sure, it's great to finally have a shooter that spiritually follows in the footsteps of a great game you played in the past (it also reminded me of Perfect Dark, to boot), but damn, the N64 was two generations ago -- what does it say about the Wii that The Conduit doesn't blow Goldeneye's graphics out of the water the way Halo 3 outshines the original Halo or Killzone 2 completely destroys the original Killzone? I don't place the blame on High Voltage at all on this one, though — they did a great job of squeezing every last drop of performance out of the Wii's tiny, bumblebee-like engine. Sure, the textures are muddy and the visuals lack any sense of next-gen polish but I didn't experience one moment of slowdown or a single graphical hitch during my entire time with the game. I almost couldn't help but wonder what the game would have been like on the 360 or PS3; I'm sure with the extra legroom, High Voltage could have presented a far more visually pleasing game.

But the Wii's lack of power doesn't explain the boring story that had me tapping the A button as fast as I could during cutscenes. There's some mumbo jumbo about some shadow organisation that's plotting to take over the world using aliens or something; I don't know, it didn't make a lot of sense. Worse still was the ending — if you can call it that. I was playing a level and after killing all the enemies, a cutscene triggered and the end credits started to roll. Say what? Where's the climactic boss fight and the sense of dramatic build up? Oh, and to top it all off, there's an obvious setup for a sequel. Sigh.

The funny thing is, after wrestling with the terrible controls for the five hours, thirteen minutes and eleven seconds it took me to beat the game (before you set the Internet aflame over how "short" the game is, I took the most direct route to the end and didn't look for all the secret rooms and discs scattered around — most of you will probably take a little bit longer), I was actually glad the game had ended. I will admit that the weapon aiming, a crucial aspect of FPS games that I've never really enjoyed on the Wii or any console game for that matter (I'm a diehard keyboard and mouse fan), is actually handled really well in The Conduit. I'd go so far as to say it's the best I've seen in a Wii title. Turning your viewpoint is smooth and there are menu options that let you customise pretty much every aspect of the interface that you could want. I played with the default and was absolutely happy with it.

What I couldn't stand, however, was the use of motion controls; for whatever reason, High Voltage mapped two critical functions #8212; grenade throwing and melee-to motion controls but even my grandmother knows that that was a dumb move. You make a throwing motion to toss a grenade and how hard you swing dictates how far it flies. But it's not an exact science, meaning your explosive either flies over your enemy's head or lands five feet in front of them. The melee is even worse: you have to thrust the Wii Remote forward to trigger it. Yep, that's right; you have to wildly move the very same Wii Remote you use to aim with. This means after you kill a nearby enemy with the butt of your gun #8212; if you can get the fickle melee to trigger, that is #8212; you'll probably die because your viewpoint was suddenly thrown off and you couldn't get it realigned in time to shoot at the enemy on the other side of the room. It's inconsistent, unreliable and a complete liability in the heat of battle.

I should also mention the game's main gimmick, the All-Seeing Eye. This admittedly cool looking device is a floating orb that hunts down hidden triggers used to unlock doors and secret sigils that give you access to super powered weapons. Unfortunately, it's used in the most obvious of ways and only plays a minor part in the gameplay; worse still, when it detects something, it emits an annoying beeping sound that gets louder and faster the closer you get. It's really poorly implemented though and it'll send you running around in circles searching desperately for the hidden item so you can shut off the grating sound.